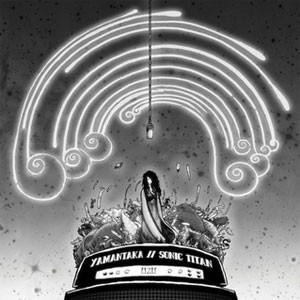 NME SXSW REPORT: “THE COLLECTIVE WHO BLEW OUR MINDS – IMAGINE YOKO ONO FRONTING BLACK SABBATH. IMAGINE EACH MEMBER OF THE BAND DRESSED LIKE A MEMBER OF KISS, FACEPAINT AND ALL. IMAGINE THEM PLAYING THE DRIVING MOTORIK RHYTHMS OF NEU! OR CAN, BUT SPEEDING THEM UP UNTIL THE WHOLE CROWD IS POGOING LIKE THEY DO AT THE BEST PUNK SHOWS”

The rock opera generally references the ambitious and occasionally bloated concept albums of seasoned big name artists. Rarely is it used to conjure a Pynchon-worthy fusion of high and low culture or a blurring of the lines between theater and music. But in the case of Toronto/Montreal art partnership YAMANTAKA // SONIC TITAN, rock opera carries all the latter connotations of the nexus between tradition and irreverence, performance art and unbridled noise. The duality of fusing Old World classicism with New World innovation goes to the very core of the group-their name is a melding of the Buddhist "terminator of death" deity with a song title by seminal stoner doom band Sleep. They describe themselves as "Noh-wave", a nod to both classical Japanese drama and the nihilistic art-punk scene of a pre-Giuliani New York City.

The yin-and-yang philosophy permeates every facet of YAMANTAKA // SONIC TITAN. The project centers around Alaska B and Ruby Kato Attwood, two art students with a mutual love of opposing forces-heavy metal's brutish assault with Japanese manga's cartoonish appeal, Boredom's experimentalism with Chinese opera, lofty schemes and low budget endeavors. The duo started out by building instruments out of found objects-once again highlighting their paradoxical nature by turning trash into art and rendering structured beauty out of detritus. Their performances veered more towards theater, with Alaska and Ruby constructing elaborate stage settings out of cardboard pasted with industrial-sized Xeroxed designs and donning elaborate Kabuki-style costumes and make-up. Such unorthodox ventures could repel the rock crowd, but YAMANTAKA // SONIC TITAN's debut album YT//ST dispelled any concerns that Alaska and Ruby didn't know how to lay siege with their instruments. Anchored by Alaska's unrepentant drumming-a blend of Melvins drummer Dale Crover's signature stomp and Einsturzende Neubauten's proto-industrial thud-and Ruby's soaring soprano, YT//ST took the narrative arc and keyboard foundation of Genesis' rock opera The Lamb Lies Down On Broadway and injected the psychedelic doom of Boris' Pink.

With their sophomore effort UZU, Alaska and Ruby continue their exploration of cultural dualities. While YAMANTAKA // SONIC TITAN has always provided an outlet for the core duo's celebration of their Asian heritage, the inclusion of auxiliary musicians and artists into the fold has reinforced one of the most crucial defining dualities of the group: the merging of diasporic and indigenous perspectives. This meeting of East and West is perhaps most visible in UZU's lead single "One". As the first YAMANTAKA // SONIC TITAN song to extend the songwriting credits beyond the core duo, "One" incorporates the indigenous upbringings of the extended group by leading off with a traditional Iroquois song. The introductory chant is a social song calling all people together, and is performed by people of the Mohawk tribe. From there, the band kicks into a driving guitar line and a vocal hook as sweet as any J-pop hit. Metal riffing, free-jazz cacophony, and meditative Eastern percussion patterns accentuate the song. In the hands of lesser visionaries, this kind of cross-pollination would sound like a schizophrenic genre mash-up. But YAMANTAKA // SONIC TITAN's appropriations never sound forced. Rather, it sounds like a celebration of the cultural collision of Alaska and Ruby's upbringing. The hybridization is evident throughout UZU--you can hear it in the operatic piano-and-vocal opener "Atalanta" segueing into the dynamic prog of "Whalesong", the Eastern melodies seamlessly melding into the synth arpeggio and guitar dirge of "Windflower", the musical storytelling tradition of "Seasickness Pt. 1" juxtaposing with the Heart-like classic rock gallop of "Seasickness Pt. 2", and the closing choir passage of "Saturn's Return" descending into Merzbow-esque white noise.