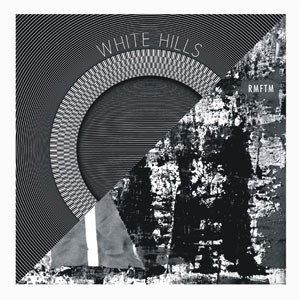 White Hills and RMFTM are the latest additions to Fuzz Club Split Single alumni, one which already boasts rock n roll leviathans The Black Angels, A Place to Bury Stranger, Alan Vega and The Telescopes.

Psych-rock favourites RMFTM contribution to the series the colossal soundscape ‘Decadence’. The Dutch instrumentalists have released three sold-out albums since their inception and ‘Decadence’ is typical of their explorative style. Coming in at just under ten minutes long the track opens on harsh industrial noise pounding through a constant wash of eerie reverb, guitar riffs chime in as tooth-rattling percussion submerges you further into this huge, ethereal wall of noise. ‘Decadence’ is truly testament to the bands limitless avant-garde capabilities. The track continues in the hypnotic, abstract sound RMFTM have built with their previous record Subversive 1 (whose follow up Subversive 2 is currently in the works) and invites fans to follow them deeper down the musical rabbit-hole.

Joining RMFTM is one of New York’s most prolific bands, stoner / psych / space outfit White Hills. The duo - whose fruitful existence has spanned over a decade and seen forty releases - contribute their space-rock epic ‘You Pass By’. Having already built a dedicated cult following, the band recently gained further notoriety after an appearance in the Jim Jarmusch film Only Lovers Left Alive. ‘As You Pass By’ is a climactic otherworldly mix of swirling electronics building up as deep bass roils beneath singer Dave W’s gravelly vocals until the song erupts into a whirlwind of bluesy distorted guitars and screeching feedback, underpinned by a chilling spoken word sample. Both acts share a love of the surreal and approach music as experimental art. Their avant-garde soundscapes are the perfect foil for one another, proving that in the case of Fuzz Club Split Singles, the whole is truly more than the sum of its parts.

White Hills - As You Pass By
RMFTM - Decadence