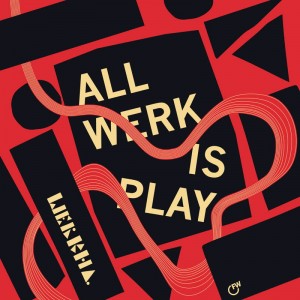 Werkha hails from Manchester and has been releasing music for a decade, collaborating and remixing artists such as Quantic, Bryony Jarman-Pinto, Marcos Valles and Andrew Ashong. Werkha and his live band have been lighting up dancefloors in recent months at venues such as Low Four Studio in Manchester and The Jazz Cafe in London, with festival appearances locked for the Summer at the likes of We Out Here and Moovin. In past years, he has toured extensively with artists like Bonobo, Chet Faker and Mr Scruff.

In 2020, Werkha released 'The Rigour' on First Word, and dropped 'Beat Tapestry' in late 2021 on a limited cassette. 'All Werk Is Play' marks Werkha's first full-length solo project since his debut album 'Colours Of A Red Brick Raft' on Tru Thoughts in 2015, and sees this multi-talented musician produce a delightfully vibrant body of werk.

This album is predominantly a set of uptempo compositions from Werkha (real name Tom Leah), fusing analogue jazz-funk vibes with modern dance music sensibilities. Nestling somewhere between broken beat and breakbeat, Werkha has been nurturing his own unique sonics for some time; incorporating live horns & wind instruments with bass, double-bass, harp and guitar, along with a selection of sweet squelchy synths and deliciously delectable drum programming.

'All Werk Is Play' was an opportunity for Werkha to produce a full body of work in the conceptual formation of an album, as opposed to a set of singles strung together. From 'The Rigour' EP to the subsequent releases, this album completes a circle in his current creative curve, from a design perspective and sonically. Werkha has been steadily pushing his own self-production and musicality, embracing mistakes, and challenging himself both creatively and mentally. As a self-edutaining piece, the depth, nuances and examples of work as play are numerous, and whilst each track was thematically inspired by different topics, the fun element of "play" was always forefront in his mind, to ultimately create something powerful, yet positive.

In Werkha's words "this record is dedicated to mixing things up, to walking down that street for once because your feet took you that way, to deciding not to take the bus today, to moments of improv, to breaking with convenience, to challenging structure, to play."

Millie says: Manchester local Werkha treating us to this 14 track album of chilled jazzy goodness. This is going straight to the front of my bag to play records out and it'll have a instant residence there rent free. It makes for the best easy listening, don't sleep on this one as you'll be kicking yourselves later.

WerkhaColours Of A Red Brick Raft

Kaidi TathamAn Insight To All Minds