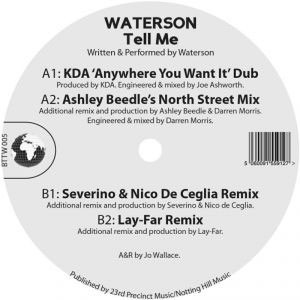 Record Label
Back To The World

This fifth instalment of Ashley Beedle's Back To The World label sees the esteemed selector rally the troops and present four killer remixes of the enigmatic and bohemian Waterson. On the A1 KDA provides his trademark pulsing bass – a sound that recently propelled him to No. 1 with Tinie Tempah & Katy B - delivering a rolling dub remix with nods to early-90s house. Hitting the dancefloor hot on his heels, label head Ashley Beedle works his house magic with a King Street inspired remix which pays tribute to the classic sound of Levan and Knuckles. On the flip, Horse Meat Disco's Severino teams up with regular partner in crime Nico De Ceglia to give "Tell Me" the proto-house treatement with a mix which is both raw and full of the uplifting and urgent energy of disco. Fast emerging as one of Europe's most in-demand deep-house producers and a leading light in Moscow's underground house scene, Lay-Far re-works the track with mesmerising depth and soul, closing the EP with a version perfect for fans of Motor City Drum Ensemble and Max Graef alike.