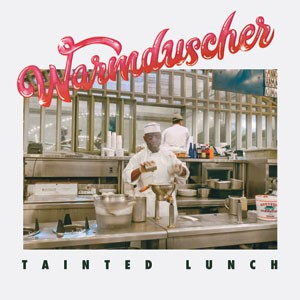 CCTV in the break room.

A little something to get you through the week. There’s enough to go around. Revenge is a dish best served bold. Melt in the mouth disco basslines on a fragrant bed of feedback. Try it with the boom bap tapenade. Here for a good time, not a long time.

If you made your way out of Whale City with your faculties intact, this one’s for you. Clams Baker, Lightnin’ Jack Everett, Mr Salt Fingers Lovecraft and The Witherer have been joined by Quicksand on cutting board and cheese wire and commis chef Cheeks on vibes. They’ve been cooking. Michelin stars. The finest ingredients money can buy: Kool Keith and Iggy Pop. Funk, punk, hip-hop and lounge rock. Love is real.

Band biographer and revered botanist Dr Alan Goldfarb describes the album as “a sample hole through which to taste another universe. A dramatic warning. A gilded aroma. It is a tale of wanton desire and limitless treachery. A tale of disillusionment – the refusal of exploitation.”

If you can’t stand the heat, get out of the kitchen.

Barry says: Massive, throbby basslines and snappy disco percussion take the lead before giving way into sweaty club grooves and distorted post-punk. Warmduscher succeed just as easily at hypnotic indie-rock as they do anthemic dancefloor tackle. Never a dull moment, and every one as brilliantly done as the last.

Bonus 7”
A. Nelson’s Threads
B. The Pressure