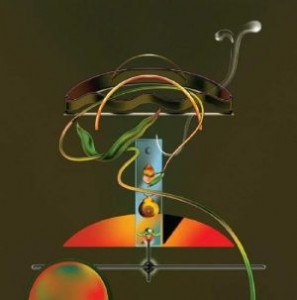 Since 2014, Wand have made five albums (and an EP) in the studio and a living playing on the road. Business / pleasure: the two sides of their (multiverticed, decagon) coin, flipping in the strobe light of ongoing self-actualization. And yet, by doing both at the same time - making a record of them playing live - they’ve now made their best one yet.

How do you get ‘Spiders in the Rain’? Start by going all the way back to January 2020. Do you remember? Wand do. They’d been touring ‘Laughing Matter’ for ten months. They’d done the coast, spanned the country, crossed the water twice, came back home and kept on going... driving, flying, occasionally floating, always on to the next town. They did all kinds of shows - clubs, ballrooms, festival gigs with no roof overhead - the songs expanding and contracting according to the dimensions of each day.

The essential truth of the live vibe - that it’s always better when everybody’s here - was clear, so they booked a few shows more in Cali, from LA up to Marin. They brought along light and projections from The Mad Alchemist Liquid Light Show and Mike Kreibel and Zac Hernandez too, to tape everything - to get the big-deck energy out of performances in SF and LA, but also to draw it out of the margins in Sacramento, Novato and Big Sur. It all happened, too. Everyone brought their experience - the kids in the audience and the folks behind the boards, all along with Wand, where it meant something different for everybody in the van:

Sofia: “At the end of 2019, the live show had become our (my) home. It was the most familiar and comfortable place to be after consistent touring for years. An access point into the language we created together, and something that was constantly evolving and refining.”

Evan: “Maybe this quiltwork of live recordings reflects a certain screwy, fugitive energy we bring that I think will feel familiar to people who have seen us at shows all these years, and that more or less refuses to be domesticated for posterity in recording studios. These shows were so much fun and so much else—loud and living. I hope this record can be a vivid little token of all those buzzing and broken and ecstatic times we shared that lately feel more fleeting, precious and poignant than ever.”

Robbie: “John Cage said that ‘art and our involvement in it... somehow introduc[ing] us to the very life that we are living...’ is for an artist the highest goal imaginable. If that’s the case then this record is Wand’s high water mark. Both because it accurately represents the way I have most often heard Wand’s music over the past six years (in rooms filled with other people) and because it is a document of the choice I made to seek out a life for myself through music. I’m happy it exists.”

Cory: “The live show has always been a means of cracking open the hi-fi-neuroticism of our studio records; to reach back into the essence of what made the composed music possible to begin with, and tap that essence as the basis for expressive unison improvisation, ‘Spiders in the Rain’ is a document of our live efforts, and I do believe it is our strongest record until we can produce a studio LP that adequately captures and expands on what is essentially displayed here.”