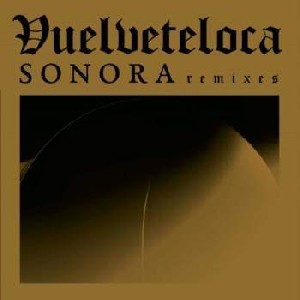 For over a decade Vuelveteloca, based in Santiago, Chile, have been shaking up the South American underground with their unhinged, doomy psych-rock. With their notorious reputation extending further afield soon enough – especially following a lauded performance at 2015’s Liverpool Psych Fest – in 2017 the band signed to London-label Fuzz Club for their fifth full-length, Sonora. Two years on and Vuelveteloca are now set to release a remix version of the album which features electronic reworkings by A Place To Bury Strangers, The Holydrug Couple, The KVB, The Men, Al Lover and more. Where Sonora originally dealt in a warped motorik assault that pooled together Sabbathian stoner-rock grooves with full-throttle psych wig-outs a la King Gizzard and Oh Sees, the remixes on display here trade their careening guitar noise for mechanical, pulsing electronics.

Take the oscillating, industrial dub of opening track ‘El Lade Frío’ (remixed by fellow Chileans The Holydrug Couple), the throbbing repetitive synths in The KVB’s reworking of ‘La Niebla’ or A Place To Bury Strangers’ twisted, overblown take on ‘Chepical’. ‘Cientologia & Altiplano’ is given a spaced-out ambient reworking via IIOII, an electronic duo from Santiago who are close friends of the band, and then in the following track, Portugal’s Pedro Pestana turns ‘Ataque Masivo’ into a piece of distorted, motorik drone not too dissimilar from his own work in 10 000 Russos and Tren Go! Sound System. This is followed by a minimalist deconstruction of ‘Carnaval’ courtesy of Brooklyn outfit The Men, who strip the song down to its bare bones. The penultimate cut sees ‘L.A.’ turned into a piece of sprawling, kosmische synthesis by LA-based producer Al Lover, who has remixed every psych band worth their salt today and is a masterful beat-making experimentalist in his own right.