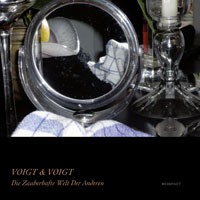 It's when VOIGT & VOIGT gather in the same studio that the sparks start to fly dangerously low within this unique machinery humbly named Kompakt, resulting more often than not in a rather unlikely combination of separate elements suddenly kickstarting into communication. For their debut full-length DIE ZAUBERHAFTE WELT DER ANDEREN, the Voigt brothers draw from a plethora of influences to build an incomparable sound world, for the first time fully realizing what previous, now classic tracks on SPEICHER have been hinting at. Produced side by side with the essential Techno of ERDINGERTRAX, this album opts for a strong psychedelic narrative, brilliantly showcasing Voigt & Voigt’s experimental inclinations while knowing a thing or two about the perfect groove.

Marrying the more cerebral aspects of Techno science with the sheer will to party, the Voigtian output is an unpredictable, but constant fixture in KOMPAKT's back catalogue that brings together the distinctive talents of brothers WOLFGANG and REINHARD VOIGT. With each one being a highly prolific artist in its own right, the joint work on their album debut never ceased to surprise even its originators, who used the twilight of their nightly studio sessions to process a shared stream of auditive consciousness feeding on influences as diverse as Techno and New German cinema.

In the meantime, DER KEIL NRW delves deep into Fassbinder territory and fuses the matter-of-fact news style of Germany’s late Seventies TV with a throbbing rhythm straight out of Thrillerville, making this a perfect candidate for car chasing scenes in Cold-War-era Berlin. TJA MAMA, SANDRA MAISCHBERGER (citing a popular German talk show) and SOZIAL consecutively calm things down for a little mid-movie catharsis, but the tension rises back up soon enough with whodunit-styled spine-chiller DIE GLOCKE (ENDSTATION WIENER PLATZ) and retro-romantic audio drama HOTEL NOKI, followed by the hauntingly detached mantra of AKIRA.

Multi-angled police procedural TRYPTICHON NUMMER 7 sees Voigt & Voigt dissecting their own trademark sounds as the end credits slowly start to roll, leading to an excitingly minimalist Synth Pop work-out eventually washed away by final orchester hits full of foreboding. It’s as if the album wants to show you one final, very important picture, and indeed it does with DER LETZTE ZUG, a short ride to the other side of reality, clocking in at just over two minutes, but carrying all the weight of an epic cliffhanger. To be continued, hopefully.