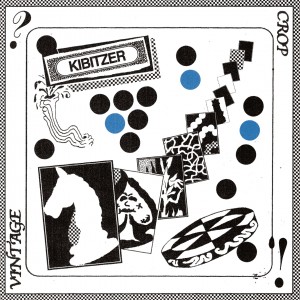 ‘Kibitzer’ was written in quick response to their critically lauded ‘Serve To Serve Again’ album. Harsh guitars, a brutish rhythm section and a knack for always having the right words at hand are still abundant, but this time Vintage Crop’s songs expand upon their forceful nature with greater harmonic arrangement. It was recorded by Jasper Jolley in one single session on a former apple orchard in Geelong, a backdrop that mirrors the band’s own organic growth whilst highlighting their willingness to approach capturing their own sound their own way. The album was then mixed and mastered by Mikey Young.

‘Kibitzer’ delves into themes of identity, resilience and acceptance; some of the more upbeat notions that the band have dealt with to date. ‘Casting Calls’ opens the record, slamming through the speakers with gusto and setting the tone for the following 30 minutes. “It’s rolling, we’re rolling, we’re winding back the tape, we’re getting better with each take” sings lead songwriter Jack Cherry. Accepting your limitations and taking pride in your work are key themes on ‘Kibitzer’. In fact ideas around learning, growing and being able to take things in your stride are strongly felt through their entire body of work. These themes hit home with the album’s title too, with Cherry feeling that ‘Kibitzer’ is an apt way to describe a lot of the band’s focus. “I feel like a lot of our lyrics over the years have been our unsolicited opinions on other people’s situations, the very definition of the word Kibitzer. So for this record we wanted to lean into that tendency by acknowledging it and even go as far as stamping it on the album cover.”

Musically the band have expanded their palette on this album; exploring a world of rhythmic harmony and a newfound vocal melodicism. There’s also greater lyrical elaboration and considered song structures at play. ‘The Duke’ is a mob of rollicking chants and heavy hitting, catchy to the core. ‘The Bloody War’ is a more sanguine reflection of tumbling drums, struck chords and shrill keyboard warble. “He’s got the keys to the universe and they’re hanging from his belt loop, his wit is as quick as lightning, his disapproving gaze is the thunder that follows” pipes Cherry on ‘Double Slants’, guitars chiming through the hubbub. ‘Hold The Line’ turns the wry amusement of dealing with cold callers into a fidgety anthem of knowing frustration. Whilst ‘Switched Off’ even welcomes the introduction of horns (courtesy of Heidi Peel) to the group’s repertoire, ushering in an unexpected serenity into their tough sound.