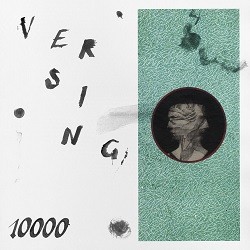 Like many important bands, Seattle quartet Versing got their start in college radio—Tacoma's KUPS. The group's main songwriter/guitarist/vocalist Daniel Salas served as alternative music director there, where he met guitarist Graham Baker, drummer Max Keyes, and bassist Kirby Lochner. Now Versing are poised to spread their coolly combustible brand of rock on those said airwaves...and beyond if the world knows what's good for it. Baker, Keyes, Lochner, and Salas have risen through Seattle's competitive rock ecosphere with nonchalant élan. They cheekily titled a previous album Nirvana, but never mind the bleach: Versing isn't emulating Sub Pop's most famous artist.

Rather, these four twentysomething aesthetes are forging an exciting sound that finds a golden mean between lustrous noise and ebullient melody. With Versing, songwriting is obviously crucial, but much of the pleasure in 10000 comes from its guitar textures. They're swarming, yet also spiky and agile. Gently chiding the Seattle music scene's self-seriousness while acknowledging Versing's playfulness and irony, Salas says, “There's a 'let's just fuck around and see what comes out,' aspect of what we do, which I think is uncommon for Seattle bands.” Versing's freewheeling attitude has paradoxically resulted in 10000, an engrossing album that's impossible to feel ambivalent about.