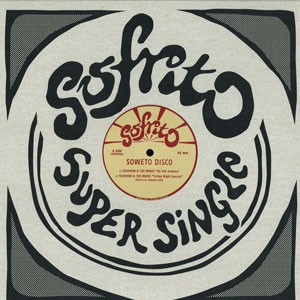 New limited edition series from Sofrito: Sofrito Super Singles, which will bring to light the finest reissues of rare and forgotten tropical dancefloor sounds. The debut release celebrates the Afro-disco and boogie scene of South Africa, - where Salsoul meets Soweto.

The three track EP features Teaspoon & The Waves - led by veteran alto player Teaspoon Ndelu. They released one album in 1980, covering a mix of disco and funk sounds for the SA dancefloors. "Oh Yeh Soweto" is a cheeky version of Lamont Dozier's "Going Back To My Roots" - changing the lyrics and toughening up the beats, but with the same killer riffs. "Saturday Night Special" is from the same LP, a spaced out Afro-disco groove with excellent percussion and psychedelic synths, re-edited by the Sofrito team. The B-side features a track by the Nzimande Allstars - another mysterious group of session musicians. The drawn out groove of "Highway Sporo Disco" fuses a heavy disco backing with jive guitar and stellar horns and organ for a unique taste of the underground sound of the Cape.