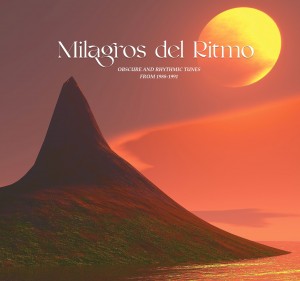 "Milagros del Ritmo" starts with the sexy voice of Debbie McKayle in "Necesito tu Amor". Her vocal mood reminds us of "Sueño Latino". The compilation continues with "Abadan" by Mondo Bagdad, who combined Arabic sounds with new beat. Also in "Zena (Dub)” there are middle east and the first Chicago house influences. The next track "Mescla Del House", released in the very late 80's, sees the Spanish vocal mixed with the Roland TR-808. Then the compilation moves from synth-pop with "Radio Arabesque" to the Balearic downtempo with "Waves" by Ambionix and into EBM sounds with "Yoshua" by Danton's Voice .

In short, a brilliant selection of ten obscure, but at the same time killer tracks which is highly on trend with cosmic / EBM / ALFOS - style DJs currently doing the rounds. Highly recommended!

Matt says: Exotic EBM and wide-eyed Balearic beat from a rose-tinted time of innocence, creativity and unity. A sound that would become iconic for an entire era of smiley faced xtc-soaked exuberance.