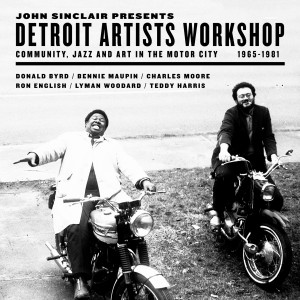 Strut and Art Yard present the culmination of a 5-year project researching the archives of author, DJ and activist John Sinclair with the first ever retrospective of the influential Detroit Artists Workshop spanning 1965 to 1981.

“In the mid-‘60s, Detroit was nowhere,” explains Sinclair. “A decaying jazz scene, no community of poets, painters or writers so a group of young Detroit artists, most of us students at Wayne State University, got together in the late Summer of 1964.” Led by Sinclair and trumpeter Charles Moore, the Artists Workshop Society was formed as a co-operative community, drawing upon the resources of every participating individual in order to perpetuate itself. They began to provide spaces in Detroit for musicians to rehearse and to promote live concerts showcasing a range progressive jazz artists across the city.

Between the mid-‘60s and the early ‘80s, Sinclair amassed a huge archive of recordings from the Workshop concerts featuring Detroit residents like Moore’s Contemporary 5, Ron English and Lyman Woodard alongside many other US jazz luminaries including Donald Byrd, Sun Ra Arkestra and Herbie Hancock. Dormant in the Charles H. Wright Museum of African American History in Brooklyn for many years, Strut and Art Yard began their research into the archives in 2017.

This first compilation of Detroit Artists Workshop is a revelation for any fan of jazz, featuring previously unreleased recordings by Byrd, Moore, English, Woodard, Bennie Maupin and Teddy Harris accompanied by extensive sleeve notes from John Sinclair, Robin Eichele and Herb Boyd. All tracks are remastered from the original tapes by Technology Works.

Matt says: From percussive heavy tribal dancers and boppin' funk that'd make New Orleans take note; to spiritual jazz so deep it'll change your religion! A breath taking comp from the city which seems intrinsic in the story of the jazz. For some the sixties are its golden age and when listening to this double disc spectacular it's hard not to see why.