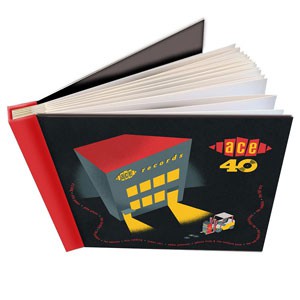 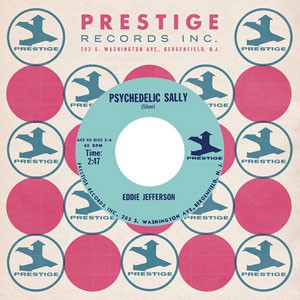 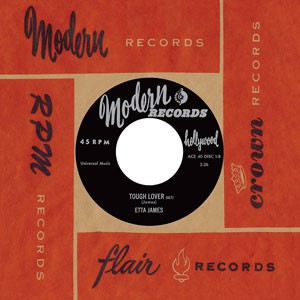 A celebration of our 40years in business: 1975-2015 represented by seven vinyl singles in a luxury box/book.

40 years on and, as the song says, we got to get right back where we started from. That was and still is the 7-inch vinyl 45rpm single. This traditional “album” contains seven 45s that could never fully represent the Ace story so far, but they touch on numerous aspects of what we have been doing all this time. There are unissued versions, highlights from our career, lost gems and an error corrected, but all truly terrific music. A small jukebox worth of recordings spanning the 20 years from which the bulk of Ace releases have been drawn. It is hard to believe only 20 years separate Etta James’ release for Modern from Joe Strummer’s first recording made for our Chiswick label, which in turn is now nearly 40 years old.

After our dalliance with pop and rock, which lasted until the early 80s and wasn’t without its highpoints, we shifted our attention to recording London’s garage and psychobilly bands in the wake of licensing the Cramps’ catalogue. But the blues, its more active little brother rhythm & blues, even more active grandchild soul and wayward second cousin who got the funk have always been a major strand in what we do. We heard some of that rock’n’roll music, liked it and put a lot of it out, alongside its sweeter pop counterpart and teenage rebel nephew 60s psych and garage that contributed to the backbone of the past 40 years of releases.

During that time, we have danced to many different tunes in many different styles. We jived, we twisted, then we shimmied (and shaked), glided elegantly across the northern soul dancefloor, pogoed and all the time shook a tail feather. These days it is more likely to be a soft shoe shuffle but the enthusiasm hasn’t dimmed. The dedicated team of Ace staff, engineers and consultants are still turning out a regular flow of great-sounding, handsomely packaged, articulately annotated CDs, with the odd LP and 45 thrown in for good measure. You can even download a lot of it, but unfortunately without the pretty pictures and sweet words as yet.

They say the future is online and they may be right, but nothing can match that warm fuzzy feeling the whiff of wax brings.

Disc Two
2A. One Cup Of Coffee And A Cigarette - Glen Glenn
2B. Youre Under Arrest - The Shirelles

Disc Three
3A. Not My Girl - The Platters
3B. No Other Guy - Lou Johnson

Disc Six
6A. I Got Mine - The Charlatans
6B. Get The Picture (Alt) - The Scot Richard Case