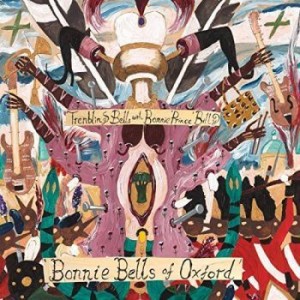 On 2012's The Marble Downs, Bonnie Prince Billy provided vocals for an album of songs by Trembling Bells. It was a fruitful meeting of mind and voice, but one that promised the real bounty when those songs were taken on the road.

That was delivered in summer of that year when the Bells & Bonnie revue brought their own brand of rolling thunder to parts of the UK. This live album, The Bonnie Bells Of Oxford, captures the highlights of one of those special shows on vinyl and CD.

The transatlantic recording of The Marble Downs is now distilled to a room on one night in Oxford town, and the force of the songs and performance concentrated similarly. It stands as a more genuinely collaborative record than its predecessor, with songs drawn from the oeuvres of both artists and reworked with a joyous spontaneity. Tensions are dissolved in this heady brew, between warring lovers, goat and ram, dark and light, heaven & hell, country and folk, this world and the next, a rhapsodic dialectic embodied by the ouborous vocals of Bonnie Billy & Lavinia Blackwall. It's a giddy whirling carnival ride over all too soon, which is the supreme advantage of having this on vinyl; when dizzy and reeling and eager for more, just wheel it up and go again.

No live album can substitute for the precious fleetingness of music heard live but the best of them can offer something else, a document, recorded proof almost that something special was created on that stage on that night by those musicians in front of that audience. More importantly, a chance to create and hear something special yourself every time you spin this record.