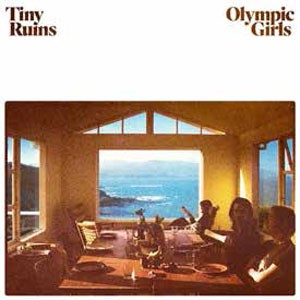 Building on the sparse minimalism and mesmerising songwriting of earlier releases, Olympic Girls comprises a taut and agile quiver of songs, dancing with explorative instrumentation and a pop sensibility that springs with life.

“How much would you be willing to give?” Fullbrook asks point-blank in first single ‘How Much’, ahead of woozily discordant strings and a stomping neopsychedelic rhythm. The lyric brims with imagery of supermarket breakdowns, lilos, snarks and silos while an anthemic guitar hook soars throughout. Not content to leave the song at a stable conclusion, a thumping ‘I am the Walrus’- esque bass outro propels the track boomerang-style back to a space of adroit experimentation.

“I’ve heard Olympic Girls, and I had to pick my jaw up off the floor”, wrote Grant Smithies. “Clustered around more introspective passages typical of confessional singer-songwriters are gnarlier phrases that give her work its buzzy voltage: arresting visual images, weird associations, daisy-chains of telling detail.”

“…an album confident in its vulnerability and luxuriating in a bigger sound.” - LOUD & QUIET (8/10).

“It’s a song that certainly leaves a mark, and suggests that seeing Tiny Ruins in their upcoming tour will be an undoubtedly memorable experience.” - THE 405.

“a twilight piece of pared down indie pop” - CLASH.