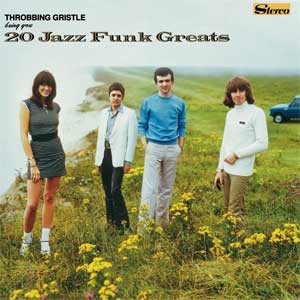 One of THE classic post-punk albums of the late 70s, "20 Jazz Funk Greats" sees Throbbing Gristle breaking away from their strictly industrial / experimental noise sound of previous years and dipping a toe in more accessible waters. Obviously that's 'accessibility' TG style, with the title track opener mixing a minimal drum rhythm, melancholic trumpet wails and synth noise - not necessarily one for the youth club disco... Originally released in 1979 - the same year as PIL's "Metal Box", and with a similar boundary-pushing desire, "20 Jazz Funk Greats" is one of the most influential albums for the forthcoming 1980s EBM movement. Standout tracks include the drum-panned sequence-heavy "Still Walking", morose "Convincing People" (TG's answer to "Poptones"?), the krautrock-inspired beauty "Walkabout" and massive disco-not-disco / electro-dance anthem "Hot On The Heels Of Love". Essential.

Patrick says: Although it clocks in at eleven tracks, none of which are even vaguely jazz-funk, this LP really is great. Better than great actually - it’s a sleazy, queasy, properly perverted masterpiece. In a move which laid the blueprint for the industrial and EBM movements which followed, Hull’s finest married post punk grit with corrosive synthesis to create a truly unsettling listen.