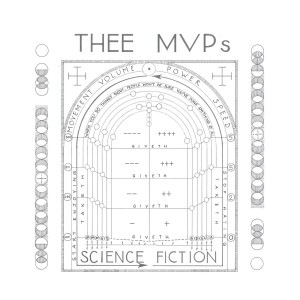 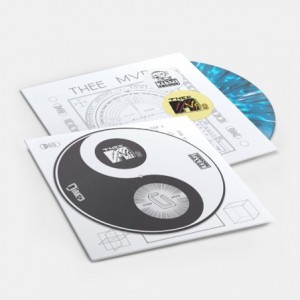 Thee debut longplayer from Thee MVPS, on their own label, taking cues from all of their favourite labels…Influenced by SST, In The Red, Au Go Go, Goner, Stiff, Castle Face, Dischord etc. (you know, the good ones!!).

The band lives in the same house in Leeds, they have a whole slew of 7” records out all over the world, some sold out, some, not, they are steeped in music, playing live and this album shows that: Thee MVPs (Most Valuable Players) love music a whole bunch and hope they made a record that shows that.

Thee MVPs ran in to quite the hurdles trying to do make this album, a good few Gs sank in the wrong places and to say bad luck follows them would be an understatement

Thee MVPs have already done 350+ shows all over the world.

Thee MVPs have played with all your favourite bands.

Thee MVPs mastered the record in Chicago with Bob Weston of Shellac.

Thee MVPs think some of the guitar solos are like J Mascis.

Thee MVPs think the bass is the best sounding instrument on this album.

Thee MVPs like Hot Snakes, The Stranglers, Sleep, Meatbodies, Marked Men, Quelle Chris, CAN, Black Sabbath, Black Flag and Super Furry Animals. Please add on whatever else that makes them sound like they have cool influences.
Thee MVPs ditched the reverb and space echo on the vocals and traded it for better lyrics.

Thee MVPs consider this album part concept - tying in references and homages to Sci Fi with themes of difficulties all of us face as we get a little less away from youth. Some themes include always having camaraderie in the face of any dire straight, how being contactable 24/7 probably isn't best for any of us and how really we're not any more different/cooler/better/worse/charming/narcissistic than anyone else because we do a band

Thee MVPs were lucky enough to have Edd's mum Sahrah, an architect student to design the cover based off Joel's readings of polymath Walter Russell.

This is the best MVPs record until the next one is out.