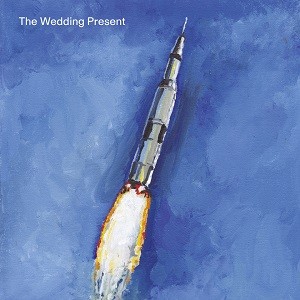 Record Label
Come Play With ME

Set to be a collector’s item, the single is available on 7” and limited edition 10” picture disc – the band’s first! – including specially commissioned artwork by Darren Hayman (Hefner). Co-written by David Gedge and new guitarist Danielle Wadey – she was previously the band’s bass player – both tracks were recorded at the legendary Monnow Valley studios in Wales under the watchful eye of multi-Grammy award winning producer Andrew Scheps and engineer Matt Glasbey.

Opening with squalls of feedback, ‘Jump In, The Water's Fine’ is an epic tale with trademark whirlwind Wedding Present guitar and a deceptively sweet melody. “Danielle came up with the solo bass part after I said I wanted to do a song that was ‘bass-driven’ and it just got fatter and heavier! We also now have three vocalists in the band so we used the opportunity to experiment with some a cappella singing, too,” says David.

B-side ‘Panama’, is a frenetic slice of indie-pop, where ferocious guitars and heavy drums collide with honest lyrics about love and friendship. Of the recording, David adds, “As well as including one of my favourite palindromes, ‘Panama’ references‘Earthrise’, the iconic photograph of Earth taken by astronaut Bill Anders (during the Apollo 8 mission) on Christmas Eve, 1968. We decided to incorporate samples of the astronauts talking to Mission Control.”

Rather surprisingly, this is The Wedding Present’s first ever picture disc. Close friend to the band Darren Hayman (Hefner, The French, etc.) was commissioned to do the artwork but his paintings were so impressive that the band decided that the time was right to embrace what is a new format for them. “It’s only taken us thirty-something years to get around to it!” says David. From their C86 roots in the mid-80s, John Peel favourites The Wedding Present have gone on to become one of the UK’s most loved bands, charting no less than 18 Top 40 hit singles. Emerging from Leeds with the classic debut album ‘George Best’ in 1987, The Wedding Present built a reputation for blending bittersweet love stories with everyday mundanity, set against a backdrop of heavy distortion and exquisite indie-pop.

In 2016, The Wedding Present released their ninth studio album, ‘Going, Going...’, which featured references to Gedge's previous work, including self-referential lyrical moments and has been described as his masterpiece. Loosely based on a road trip across the U.S.A., the double LP was described by Louder Than War as “A remarkable album. A joy from start to finish." The same year, to commemorate the 30th anniversary of their debut album, ‘George Best’, The Wedding Present released ‘George Best 30’. This album featured brand new versions of the original twelve songs recorded by Steve Albini and mixed by Andrew Scheps. 2017 also saw the publication (by Red Planet) of ‘Sometimes These Words Just Don't Have To Be Said’ – a 450 page 'fanthology' of the band.

In 2018, KneejerkFilm released ‘Something Left Behind’ – a feature length documentary telling the story of the ‘George Best’ album. The film, which featured interviews with all four original band members and was produced and directed by Andrew Jezard, has appeared at several film festivals.