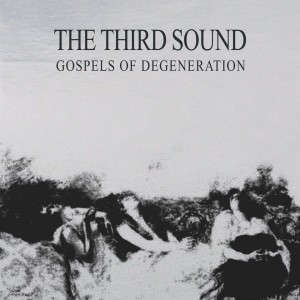 The Third Sound's new album Gospels of Degeneration shows a shift in style for the group, having toned down the shimmery psychedelia in favour of something a little cleaner. That’s not to say this is a barren sounding album at all, it’s still hypnotically layered with country-kissed reverb, and retains those itching guitar riffs that will keep whispering through your mind for hours after listening.

Founded by Icelandic frontman, Hakon Aðalsteinsson - an ex-member of Singapore Sling who are often hailed as founding members of the new psych sound - The Third Sound came into being in Rome in 2010 and have since relocated to Berlin. Since forming, The Third Sound have enjoyed the support of Anton Newcombe, who released their self-titled first album, on his label A Recordings, and chose the group to support his band The Brian Jonestown Massacre on tour in Europe. He also provided the studio for recording their second album The Third Sound of Destruction and Creation which was released on Fuzz Club in 2013. Most recently they’ve shared members with Anton Newcombe and Tess Parks’ band, which led to Parks’ appearance on the single “You Are Not Here” from this new album. What began as somewhat of a solo project by Aðalsteinsson, the new album sees The Third Sound stretching its definition with deeper levels of collaboration between band members and the influence of a new character in its story, the city of Berlin.

The group’s sound has been described as “ebbing between light and dark, dream and reality, pop and experimentalism” and “ranging from hypnotic soundscapes to tweaked out and fuzzed up numbers.” In a recent premiere on Clash Music they were described as "lynchpins of the psychedelic underground."