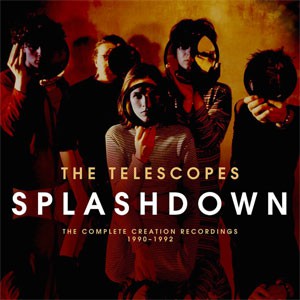 In early 1990, The Telescopes signed to Creation Records, who were enjoying success with bands like Teenage Fanclub, Ride and Primal Scream. Over the course of 1990-1991, The Telescopes’ sound evolved across three EPs. ‘Precious Little’ retained their earlier menace; ‘Everso’ was dreamier than before while ‘Celeste’ and ‘Flying’ blended psychedelia with a vaguely dancey backbeat. In 1992, The Telescopes unveiled their next album, #Untitled Second, a fascinating assemblage of their influences to date and a work which has matured well and subsequently inspired many so-called Shoegaze bands.

Sadly, the band disbanded soon after the LP’s release but reunited a decade later. Since then, The Telescopes have embarked on a musical adventure, creating music which is both exploratory and engaging. Only this year, they issued a new album Hidden Fields. Curated with the full cooperation of The Telescopes’ frontman Stephen Lawrie, Splashdown is the first-ever compilation to properly document the band’s three-year tenure with Creation Records. The first CD combines their four EPs for the label, with the added bonus of some tracks planned as the B-sides for an abandoned final EP. Disc 2 re-presents the band’s second album, which is joined by bonus material including some cover versions donated to compilations and a previously unissued session for John Peel’s show BBC Radio 1.