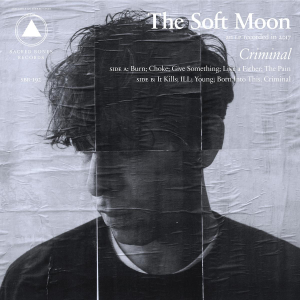 Criminal, The Soft Moon’s fourth studio album, is a confessional work. Through the stark lens of shame and guilt that has followed Luis Vasquez since a violent childhood growing up within the humming ambient sprawl of ’80s Mojave Desert, here he documents the gut-wrenching sound of going to war with himself.

Criminal marks a striking and important chapter in his self-exploration, both artistically and emotionally. As a young musician living in Oakland, Vasquez began to try and process the narrative of his difficult upbringing veiled through musical exploration.

Sacred Bones is now repressing this favourably received record in a bunch of new colors in celebration of the label’s 15th year anniversary.

“His bleakest - and most cohesive - music yet” - All Music

“On his fourth album as The Soft Moon, post-punk auteur Luis Vasquez finally breaks from a whisper into a scream.” - Pitchfork

“There are plenty of deliciously bitter pleasures here for anyone who similarly loves brooding in that blacked-out, candlelit bedroom of the mind.” - A.V Club