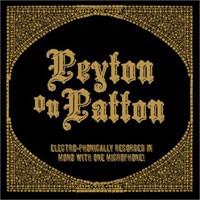 Record Label
Side One Dummy

A lot of folks will tell you that Robert Johnson was the King of the Delta Blues. But don‘t say it in front of Reverend Peyton. The guitar-wielding leader of The Reverend Peyton‘s Big Damn Band has no problem praising Johnson and his incredible body of work. “But there‘s only one King of the Delta Blues, and his name was Charley Patton,” Peyton said. “I‘ll go toe-totoe with anyone who says different”. ‘Peyton On Patton’ is a powerful tribute to The Rev’s hero.

The 13-track album features songs written and recorded by Patton during his brief recording career, which came to an end upon his premature death in 1934.

During his lifetime and for nearly a quarter of a century afterward, Charley Patton was regarded almost universally as the preeminent Delta bluesman. He spent his formative years at Dockery Plantation near Ruleville, Mississippi, where he influenced future blues and gospel stars including the aforementioned Robert Johnson, as well as Son House, Willie Brown, Pops Staples, John Lee Hooker and Howlin‘ Wolf. His flamboyant performance style was widely emulated and his songs frequently covered. During a fiveyear period, Patton recorded nearly 60 songs for Paramount Records.

The release includes three radically different versions of ‘Some Of These Days I‘ll Be Gone’ featuring varying instrumentation and recorded in different keys and arrangements.

Although Patton sometimes recorded with other musicians, Rev. Peyton regards his hero‘s solo recordings as his best. For that reason, ‘Peyton On Patton’ is a largely solo affair with Reverend Peyton‘s growling vocals and searing guitar work placed front and centre. But while the rest of the Big Damn Band are used sparingly, they make a number of crucial contributions to the record. Washboard Breezy - wife of Reverend Peyton - contributes washboard percussion, Aaron ‘Cuz’ Persinger, whose thundering drums are a mainstay of the band‘s live shows, here plays in a starkly different manner, drumming with just his hands on a century-old tobacco barrel.