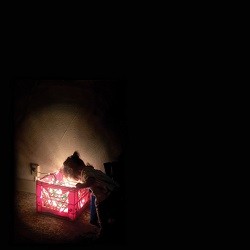 A Love Sleeps Deep’s bones rattle with all the seismic changes of the last five years since the release of The Moondoggies’ Adios I’m a Ghost. While the Washington band got lumped in early on with the woodsy folk-rock/Americana movement that sprung up in the Pacific Northwest in the 2000s, the core Moondoggies sound has always been rock in the more classical sense—more Pink Floyd than Woody Guthrie. A Love Sleeps Deep crystalizes that. Perhaps more importantly, A Love Sleeps Deep finds singer/guitarist Kevin Murphy at his most pointed as a songwriter. There’s no lyrical pussyfooting this time around. Lacking the need to prove himself, he opens up and lays bare his feelings.

“Generally, I feel frustrated because there’s a lot of this escapist stuff going on in rock and roll,” says Murphy. “I just didn’t want to not talk about my frustrations with what I was seeing around me. I have two little girls now, and I’m just thinking about where things are going. Love in my life has changed everything.”

Recorded in Seattle in the spring of 2017 with production wizard Erik Blood (Shabazz Places, Tacocat, THEESatisfaciton), A Love Sleeps Deep is also an album of collaboration. The band seemingly threw each tune up in the air to see how it bounced around the room, making sure everyone got their hands on it. From around 30 initial demos, Blood helped select the most jam-heavy numbers. “They had that vibe that made me love the band in the first place, but with a weathered distinction and confidence that moved me,” says Blood..

Richmond FontaineDon't Skip Out On Me