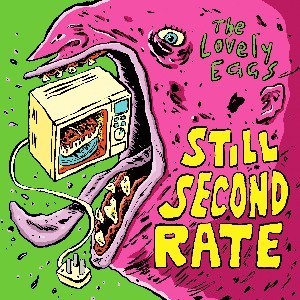 “Still Second Rate” is the second single from The Lovely Eggs forthcoming album “I am Moron.” Released on limited edition 7” snot green vinyl and accompanied by mind melting artwork designed by Casey Raymond “Still Second Rate” is the latest instalment in the Lovely Eggs current catalogue of contempt for a modern culture that is bringing the world to its knees. “Still Second Rate” forces you to question the difference between value and worth. It also includes a pretty impressive re-creation by the band of the Working Tax Credit Hotline hold music! It follows on from their single “This Decision” released earlier this year which reached number #1 in both the physical and vinyl charts and was hammered by DJs at BBC 6 Music including Iggy Pop, Marc Riley, Steve Lamacq, Chris Hawkins, Gideon Coe, Tom Robinson and John Kennedy at Radio X.

For the last two years The Lovely Eggs have sat back and watched England and the rest of the planet slowly eat itself. Their new album “I am Moron” is the result of their observations. Following up from their critically acclaimed 2017 album “This is Eggland”. It is their second album co-produced and mixed by Dave Fridmann (The Flaming Lips, MGMT, Tame Impala) and continues their journey through Eggland into the unknown. Continuing the heaviness of “ This is Eggland” “I am Moron” brings more depth to their sound bringing with it a mix of heavy psych, pop and strangeness. Some songs flicker between an earthly realism and the otherworldly loneliness of a one way space mission. With no booking agent, manager, record label or publisher The Lovely Eggs are truly independent. And this isn’t due to economics. This is by design. From day one. And support for them is snowballing. They are selling out bigger and bigger venues and more eggheads are joining them in their crusade against bullshit. Still Second Rate is a powerful harsh hit at reality. The Lovely Eggs say it how it is. They’ve never been afraid to swim against the current and now they’ve got an army of fans behind them.

The Lovely EggsIf You Were Fruit (Deluxe Version)