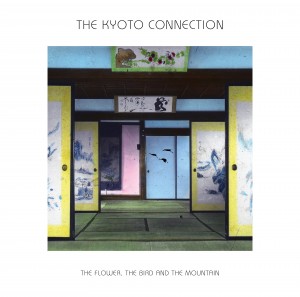 180g vinyl pressing. – ‘A love letter to the masters of Japanese ambient and environmental music.’

During the late 2010s, music lovers around the world began obsessively listening to increasingly esoteric albums on Youtube. More often than not, they’d leave the browser on autoplay. This was how Facundo Arena, the composer and producer behind The Kyoto Connection, discovered the technonaturalistic pleasures of Kankyō Ongaku (environmental music), a distinctly Japanese interpretation of European, British and American minimalist composition and ambient music. ‘It was a kind of algorithmic magic’ he says.

Upload by upload, the utopian music of Hiroshi Yoshimura and his 80s Japanese contemporaries transported Facundo back to his childhood. When he was five, his father placed him in karate lessons and began watching martial arts movies with him. From those early experiences, Facundo became fascinated Japanese history, tradition, and culture, particularly that of Kyoto - the cultural capital of Japan. Kankyō Ongaku reminded him of hearing the sounds of Japanese folkloric instruments as a young boy, and suddenly, the way the influence of Japan had manifested in his music made sense. ‘I had the sensation that for many years, I’d been doing something similar to the style,’ he explains.

Inspired, Facundo used an iPad and an old Akai cassette deck to record “Postcards”, his homage to Japanese minimalism and Kankyō Ongaku. By this stage, he was twelve years deep with The Kyoto Connection, the musical project he launched in 2005 in his hometown of Buenos Aires, Argentina. Over that late 2000s and 2010s, Facundo, later on joined by collaborators Rodrigo Trado (drums), Jesica Rubino (violin) and Marian Benitez (vocals, now his wife), released numerous D.I.Y albums. Project by project, they followed the threads between 80s synth-pop, ambient, new age, house, techno and acoustic composition.

“Postcards” introduced The Kyoto Connection to listeners around the world and brought Facundo into our orbit. During Argentina’s covid lockdown, Facundo received a set of soundscapes recorded in Kyoto by the Japanese musician and sound designer Masafumi Komatsu. Over several insular months, he decorated them with synthesisers, samples and subtle rhythms, creating The Kyoto Connection’s next album, “The Flower, The Bird and the Mountain” which was a natural choice for Isle Of Jura offshoot Temples Of Jura.

Ostensibly made up of twelve distinct tracks, listening to “The Flower, The Bird and the Mountain” feels more akin to spending calm, meditative time in twelve specific environments. Although the foundations they rest on are recordings made in geographic locations around Kyoto, Facundo has yet to visit Japan. As a result, the landscapes he paints sit somewhere between fiction and fact, richly pictorial sonic imagination juxtaposed with echoes of reality. Regardless, as his bubbling melodies and glistening synthesisers glide against Masafumi Komatsu's recordings, Facundo guides us into a blissful zone of tranquility well worth spending time within.

Matt says: Sublime Japanese-inspired serenity from The Kyoto Connection. Perfect blue-sky gazing in the garden music - through the LP's course you're transported to place of absolute calm and horizontal decadence. Make sure you've a waiter to hand as you won't want to leave the hammock!