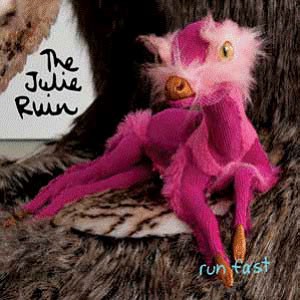 After a seven-year hiatus from the music scene, Kathleen Hanna (Bikini Kill, Le Tigre) triumphantly returns with a new band, The Julie Ruin, and their debut album, Run Fast. The Julie Ruin is poised to bring back the presence and voice of one of punk’s great icons. This release also marks the much-anticipated reunion of Hanna with her Bikini Kill bandmate Kathi Wilcox.

After Bikini Kill disbanded in 1997, Hanna released a solo album titled Julie Ruin. Her desire to perform these songs led to the formation of electro-pop group Le Tigre. That band quickly took on a life of its own, however, releasing three full-length albums and inspiring legions of fans before going on hiatus in 2006. In 2010, Hanna revisited the idea of creating a band to perform her solo material. This band became The Julie Ruin.

For this project, Hanna put together her dream group: Wilcox on bass, Kenny Mellman (of punk cabaret sensation Kiki and Herb) on keyboards, Sara Landeau on guitar and Carmine Covelli on drums.

Recorded at Oscilloscope Studios in New York, the thirteen songs on Run Fast range from sing-along anthems about being part of the underground in the modern economy (“Kids in NY”) to punk stompers (“Oh Come On”) and danceable takedowns (“Ha Ha Ha”). The album also includes the soulful “Just My Kind,” produced by James Murphy of LCD Soundsystem. Besides a couple of songs mixed by Hanna herself (“Oh Come On” and “Goodnight Goodbye”), the bulk of the album was mixed by Eli Crews (Tune-Yards’ whokill).