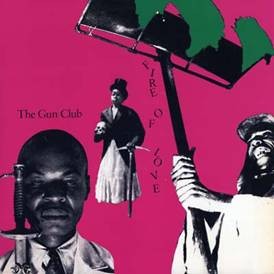 Reissue of the legendary and unbeatable first Gun Club LP, originally released on Ruby Records in 1981.

Jeffrey Lee Pierce - reggae enthusiast, heroin addict, and former president of the Blondie fan club - suffered a lonely, depressing death on March 31st, 1996 of a brain hemorrhage, after untold years of drug use and alcoholism. Why this event mattered much to anyone lay in a fantastic record by his band. The Gun Club recorded 16 years earlier, the masterful "Fire Of Love". A visionary and fierce moment in time when The Gun Club took the raw, dripping meat of shopworn delta blues and infused it with the energy and fire of the LA punk rock scene.

Inspired by bands like X, Television, the Cramps, he met Kid Congo Powers (who will later play with Nick Cave and Cramps) and they formed the Creeping Ritual in 1979, soon to be renamed The Gun Club. Pierce was already a notorious drunk, exhibitionist, poet and fanboy. The Gun Club were quickly a dangerous new spoke on the spinning wheel of dynamic LA alt-culture. By 1980, Jeffrey Lee had moved into a deep reverence for Mississippi delta blues. The Gun Club paid more than passing homage: they wholeheartedly swiped complete riffs, words and attitude from the masters. Pierce participated in the great blues singer tradition by cobbling together distinct lines from other people's songs to create new ones. Snatches of Blind Willie Johnson, Blind Lemon Jefferson and Robert Johnson can be heard throughout this debut LP –released in 1981 on Slash’s Ruby Records.

What makes "Fire Of Love" such a brilliant listen long after its time is that this blatant homage to the blues was amplified, energized and kicked into overdrive - in a new style that combined the ghostliness of the original model with a FAST, unwound and supremely energetic beat. The engineering feats of Pat Burnette contributed to that sound: he wielded his Quad-Teck studios like a weapon, and mastered some of the greatest sides in LA music history (such as Germs’ “GI”). Pure fullness of sound and the raw hot throb of records that were made to stand the test of time.

From the immensely dark and aggressive sexuality of "Sex Beat", Gun Club's most recognizable number, to the fetishistic salute to fellow traveler Poison Ivy of The Cramps in “For The Love Of Ivy”, including the hellfire classic “She’s Like Heroin To Me”, a 2:33 masterpiece in which everything comes together; “Fire Of Love” is pure perfection. They would never reach this level again. No one would, either. "Fire of Love " stands among the greatest classics of Rock history, and shows the genius of the great Jeffrey, whose haunted singing has never been replaced. It proved out to be one of
the most influential records of the 80’s, with countless musicians declaring their love for the Club. Can’t be recomended enough, this album is a real classic that has been criminally underrated. The beginning of a legend. Let's give the devil his due for this one, and ask him to take real good care of Jeffrey.