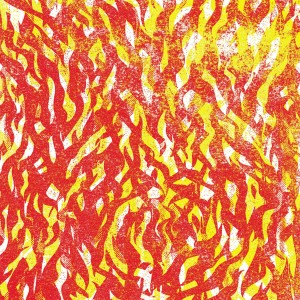 Kevin Martin’s first solo full-length album under The Bug moniker for seven years could not be better timed, and could not be more needed: ‘Fire’ - the third exhilarating part of an incendiary urban triptych, that began with 2008’s explosive ‘London Zoo’ via 2014’s mind-melting 'Angels & Devils' - is fourteen tracks that immolate the synapses, flail the body, that cinematically take you from arcing evocations of a bleak lockdowned city-scape to swooping deep-focus close-ups of Martin and his collaborator’s psyches at breaking point. The aggression, the attitude, the vertiginous scope and subterranean incisiveness, the destabilising unsettling frenzy of The Bug sound is marshalled to perfection throughout but ‘Fire’ is no mere reanimation of the Bug’s past - for Martin, the album is both a response to the unique circumstances of the past year but also a chance to reflect his own journey from reclusive sound-obsessive to family man, and his thirst - in a period of enforced hermetic isolation - for contact, for the mayhem that can only happen between people, noise and bass, the derangement of the senses that has been Bug’s method and trajectory ever since it first crawled out of London’s deepest corners in the late 90s. It’s the Bug’s best yet, possibly the most ferociously realised and immensely moving music Martin has ever made, and still touches on those initial cravings and impulses that first propelled ‘London Zoo’ into your world like a pipe bomb through your letterbox. It’s a HUNGRY record in all senses.

“I've always been addicted to the physicality and intensity of sound: I started The Bug because I wanted to make music for a soundsystem I had in storage, and the live experience of The Bug has always been something I wanted to reflect on record - I’m always looking for fuel to the fire and live shows - and MISSING live shows in lockdown was a real impetus” Martin admits. “I’m always asking - how can I ramp this up MORE? How can I get people more out of control? For me a live show should be unforgettable, should alter your DNA, or scar you for life in a good way - that’s always been my goal, to set up shows that are unforgettable. I like friction, chaos, fanning the flames with sound, and this album is the most reflective of the live show in terms of intensity and the sheer fuck-off attitude of those shows. ‘WHAT the FUCK?’ is the reaction I want - insane is a good reaction especially at a time when there’s so much control in how people consume music and are pacified culturally”.

The MCs featured (longtime likeminds like Flowdan, Roger Robinson, Moor Mother, Manga Saint Hilare, Irah & Daddy Freddy alongside relatively new names to the Bug stable like Logan, Nazamba and FFSYTHO) inevitably reflect the external madness of a world turned upside down, but also dig deep into themselves to craft reflective, pitilessly honest portrayals of the rage, resistance and resignation the last year has engendered in all of us. Check the juddering maelstrom of ‘Clash’ wherein Logan matches every lunging hit of the kick and Martin’s none-more-dank dubtronics with a diseased narrative of mental warfare and strife, or ‘Pressure’ where Flowdan imperiously calls out the universe for a scrap over a beat so thunkingly rapacious its as if the ghost of Andy Weatherall has been reanimated for some rerubbing duties. Throughout ‘Fire’ you can hear MCs and Martin upping the ante, pushed to new heights and lows by an ever-present, periphirally-glimpsed armageddon. The album is bookended by the TS Eliot Award winning poet and long term friend and collaborator Roger Robinson.

“2020 was the worst dystopian nightmares made real - part of me was panic-stricken, the other part of me was ‘how am I going to stay sane?’” recalls Martin. “I’ve got to support 4 people and it might be YEARS before I play shows - this was at the back of my mind making the album. Just to keep calm I got into making solo albums which was meditative, got me back in touch with myself and enabled me to rebuild my studio which kept me working and helped me keep my head straight. It was crucial because I’ve realised through life that what keeps me grounded is music. I used to think I wanted to bury myself in NOW, reality, sensation, information - as time’s gone on I’ve realised I want to actually make a parallel world in sound - the studio gave me an escape from just how fucked up the world was last year. That feeling of external chaos but really questioning yourself internally is something that all the MCs, in different ways, reflect on ‘Fire’. And I feel I’ve grown - making music not just as an egotistical pursuit but to support my family has meant I’ve stopped overthinking things - we KNEW when tracks were finished and loosening my maniacal control over the music, letting it breathe and come together more naturally. That’s something I think you can hear throughout the album.”

‘Fire’ then is 14 tracks that not only chart where we are right now, but offer tantalising glimpses of just what miracles we might soon conjure again together. Growing up VAST. Get some ‘Fire’ in your belly and feel the BURN. This plague has found its soundtrack.

Barry says: Having long been one of the most uncompromising forces in music, there is a significant amount of excitement over the new Bug LP. and with good cause. 'Fire' lurches from cavernous bunker techno to shadowy trip-hop via dark hip-hop, perfectly performed by a superb line-up of guest collaborators, and brought together in The Bug's inimitable no-holds-barred production style. Superb.