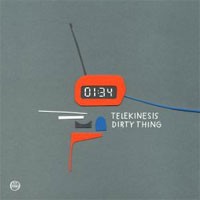 After his stunning self titled debut album, Michael Lerner aka Telekinesis brings you "Dirty Thing", which pays homage to the culture of Low Fidelity, Michael Lerner recorded this EP all alone with the microphone of his Macbook and "insane amounts of compression". The record's raw sound fits perfectly to its five songs: candid, straightforward and always emotional: This is exactly the kind of rock n roll-record that's become rare - just a bunch of incredibly catchy two-minute-tunes. While two of them are brand new, you'll already know the other three: "Calling All Doctors" (from the debut album - different version though), "Meaningless" ( Magnetic Fields cover) and "The Drawback" a Warsaw ( Joy Division) cover.