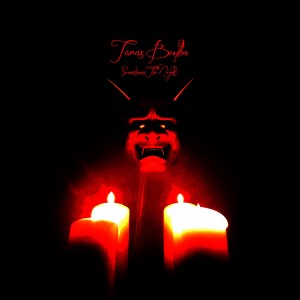 The third release from Fred Laird was recorded during the period June 2020 and January 2021 on 24trk home studio recording. It is also the first album recorded purely as a solo artist with the occasional guest and draws more from a roots style music (trad it isn’t) than previous more psychedelic releases.

‘Inspiration for the album came from listening to the self-recorded primal music of Hasil Adkins and the first solo Link Wray album for Polydor. The idea of these guys just doing what they wanted back of beyond seemed more akin to me sat in a box room during lockdown feeding off a diet of Billy Chong Kung Fu horror flicks, David Lynch, Noir crime movies, Jean Cocteau and the works of Yukio Mishima.

Musically the sound draws from early Bad Seeds or Crime and the City Solution, Gallon Drunk, Bohren and Der Club of Gore, The Cramps, Hasil Adkins and various other trash inspired twilight creatures. I also wanted to try and create that spooky organ sound that dominates the midnight movie classic ‘Carnival Of Souls’, so there’s quite a lot of organ and piano going on. I also got my hands on a baritone guitar to give the songs more of a deep growly twang!

Vocals are provided by Daisy Atkinson for the Jean Cocteau dedication ‘Orphee’ which is the nearest thing to a pop song on the album and the echoey almost Sister Lover’s sound of the title track. I got sick of my own shit voice and I just thought a female voice would give it a more fragile ethereal vibe.

Mike Blatchford provides formidable saxophone to the album’s last three tracks which were recorded on his mobile phone 300 miles away and synched into the music. The big blasted swing blues of ‘The Big Duvall’ is a dedication to Andy Duvall of Carlton Melton – a big guy who needed a big song. Who knows how big the song could have been in a proper studio. I could have dedicated it to John Wayne but Wayne couldn’t chop down trees with his bare hands like Andy can….’