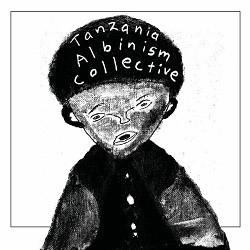 Ukerewe is the largest inland island in Africa and can only be reached by an overpacked four-hour ferry ride on Lake Victoria. It is a place so remote that historically people often traveled there to abandon their albino children, based on the regional belief that they are in some way “demonic.”

Eighteen members of the Standing Voice community volunteered for their first ever songwriting workshop, ranging in age from 24 to 57. But even among the willing, singing-out proved difficult, considering the group routinely avoided eye contact, rarely spoke above a whisper, and were unaccustomed to dancing.

Produced by Grammy-winner Ian Brennan (Tinariwen, Zomba Prison Project, Ramblin’ Jack Elliott), the Tanzania Albinism Collective actively pushes the boundaries of what is considered Eastern African and “world music,” while continuing to attract greater awareness and confront the dangers that the collective face daily due to prejudice and persecution at home.
For fans of: Francis Bebey, Uyghur Folk Music.