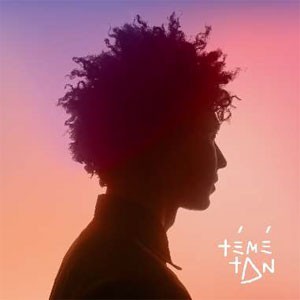 Témé Tan, the musical alias of multi-instrumentalist and producer Tanguy Haesevoets. Travelling is in his blood - born in the Democratic Republic of Congo, his family were constantly back and forth between Belgium and Kinshasa - something which is effortlessly reflected and at the heart of his debut long-player which is both ultra modern, reflecting the life of a man who can feel at home on four continents, and shot through with a deep respect for older traditions and identities. He grew up surrounded by the zouk and rumba music of his Congolese relatives, but it was in Brussels, while at school, that he started to make music and where it became clear he was possessed of some serious determination, and an unquenchable thirst to learn. Though he'd never played any instruments before his first band, he taught himself guitar because he'd fallen in love with Brazilian bossanova and tropicalia – unique and complex sounds both - and started learning to tap out rhythms on an MPC sampler because he wasn't hearing the beats that he wanted anywhere else. During this period of experimentation, people would call his tracks 'world music', which he felt very strange about. He was always happy to consider himself African ('that's where half of my origins are') yet in Congo he was perceived as white and European, so there was no easy identity for him. But as he travelled the globe during his studies - Latin America including Brazil, Japan, where he got deeply into sophisticated Japanese electronic pop by artists like Cornelius and Tujiko Noriko - he would discover a musical identity more complex than even his origins might have suggested. It was the release of a new Konono n°1 on Crammed Discs that eventually tied all the musical threads together. 'It spoke to me so much because of growing up in Congo, I was truly overwhelmed by that 'Congotronic' sound,' he explained. It was at this point that things came full circle, and all the influences from his world travels - whether 1990s rap on the Belgian radio, 1960s Brazilian grooves, 2000s Japanese experimentalism or modern bands like Animal Collective and cLOUDDEAD - connected to his very earliest musical memories, and he began to conceive of a clear voice and identity for himself among all of these sounds and strands. It was here that the name Témé Tan was first coined by his Japanese friends.

Happy now that there is a climate where acts like Jai Paul, Mo Kolours and El Guincho can unselonsciously join cultural dots without being branded 'world music'. He may have found a creative space for himself built on all the phases of his life, and all the nations and cultures he's experienced, but it's clear Témé Tan has only just begun learning and expanding.