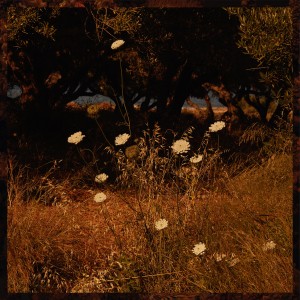 The members of Szun Waves may not have been collectively in the same country, let alone room, for over two years, but that hasn’t prevented them from realising their third album, Earth Patterns.

The trio – comprised of producer Luke Abbott, saxophonist Jack Wyllie (Portico Quartet) and drummer Laurence Pike (Triosk/PVT/Liars) – recorded the album sessions together at the tail end of their 2019 European tour, locking themselves away in the studio for three days of improvisation. They emerged with hours of music, some inspired by their live shows, most born fresh in the studio itself, ready to be moulded into the group’s third album in five years.

However, with Laurence marooned in Australia, and Luke and Jack grounded in different parts of the UK, it meant an unexpected reassessment of the band’s creative remit, and the enforced long gestation period almost inadvertently ended up creating the most fully-formed Szun Waves record to date.

Where second album, New Hymn To Freedom, had its face tilted up to the heavens, Earth Patterns is a more grounded record, and in places, a more claustrophobic one: Wyllie’s saxophone squalls ripple in the background as Pike’s dense drums clatter, both shaped and guided by the atmospherics of Abbott’s synths. Moments of jazz harmony collide with cinematic soundscapes; long searching passages build into kaleidoscopic frenzies.

“I think the record we've ended up with is an emotional outpouring,” Abbott says. “There's a fluidity to it that feels like we tapped into something quite raw. The last record felt like drifting in space but I see this new record as a journey from the outer reaches of the universe down onto the earth, like a macrocosm to microcosm arc,” he explains.

Side A
A1. Exploding Upwards
A2. New Universe
A3. Garden
A4. In The Moon House
Side B
B1. Be A Pattern For The World
B2. Willow Leaf Pear
B3. Atomkerne