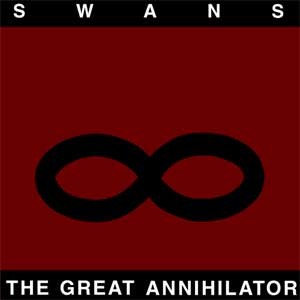 Swans present a remastered reissue of their ninth studio album, ‘The Great Annihilator’, on Mute.

‘The Great Annihilator’, originally released in 1995 and described at the time as “…a majestic symphony of haunting melodies and shifting moods” (SF Bay Guardian), will be released as a 2CD set, on double vinyl - the album’s first release on vinyl for decades - and as a digital download album. (Michael Gira’s ‘Drainland’ is also available as a standalone digital download album.)

The 2CD and double vinyl (in the form of a download code) formats will also feature ‘Drainland’, Michael Gira’s debut solo album recorded at the same time as ‘The Great Annihilator’.

The album was entirely remastered by Doug Henderson but only after Bill Rieflin (‘Honorary Swan Forever’) recently tracked down DATs and cassettes containing unmastered mixes from the sessions. Michael Gira describes the discovery as “a revelation of great sonic effect.” Talking about the recording, Gira said “I lived in a tent in a mosquito infested studio right next to Cabrini Green in Chicago for what (?) something like 3 months, rarely leaving. Band members and Jarboe and Bill Rieflin etc came and went, and somehow we crafted this thing into what it became.”