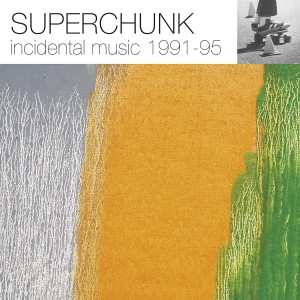 Superchunk's Incidental Music: 1991-1995 is the bandís second compilation of singles, B-sides, and EPs, originally released in 1995 shortly after their landmark album Foolish. It collects fan favorites from soundtracks such as "Shallow End" and B-sides like "On the Mouth", as well as covers of The Magnetic Fields, The Verlaines, The Chills, and even Motorhead. All Music's Fred Thomas says it all: Incidental Music is an essential piece of the Superchunk discography and a snapshot of the band as it transitioned from the scrubby radiance of its early days into the more nuanced songwriting machine it became throughout the mid-90s.

Exclusively for Record Store Day 2022, the double LP makes its first reappearance on vinyl since its original release, with LP1 on opaque green and LP2 on opaque orange housed in a gatefold jacket.