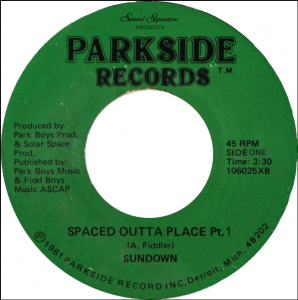 Sound Signature pull an absolute rocket outta the racks and re-issue a 7-inch single from Sundown titled "Spaced Outta Place". Composed by Amp Fiddler, "Spaced Outta Place" was originally released in 1981 on Parkside Records and has become a holy grail of the jazz-funk scene - fetching upwards of £250 when 2nd hand copies do surface.

Theo's obviously had word with Amp, and so we reap the rewards of this Detroit connection with a fully licensed reissue of this stone cold double A-side. Part 1 introduces the funk slowly and steadily, over a collage of whistles, cowbells and sirens before dropping right in to a bright n breezy pocket; sunshine beaming off the guitar chops and funky piano licks. Part 2 picks up the energy, locking us into that groove at a faster pace, and making it chug along at a nice 4/4 rhythm. Wiggly Moog solos jump outta the mix, whilst the piano holds down much of the work loud with the bassist. Supreme funky hustle and bustle! Exactly the stuff Theo works crowds up into a frenzy with in his DJ sets.

Don't sleep on this rude boy!!

Matt says: Rare and bad ass early boogie / funk from Detroit featuring fuckin' Amp Fiddler! It's a mad Motor City connect involving Theo Parrish and it's saved anyone interested about £250 and a lifetime digging. DO NOT SLEEP ON THIS, one off pressing. Licensed and legal. You lucky buggers!