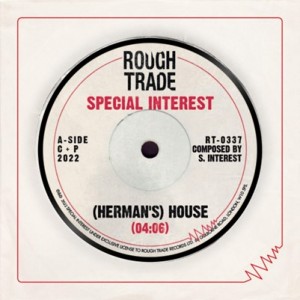 “(Herman’s) House” is centered around the story of Herman Wallace, one of the Angola Three - three Black revolutionaries who were held for decades in solitary confinement while imprisoned at Louisiana State Penitentiary. Two of them, Wallace and Albert Woodfox, were held for over 40 years in solitary confinement. During Wallace’s imprisonment, he became close with an artist, Jackie Sumell, and the two collaborated to create Wallace’s dream house, taking four years and hundreds of letters to design it.

Inspired by the Angola Three’s refusal to give up and their ability to continue to dream in darkness, Special Interest vocalist Alli Logout and guitarist Maria Elena say, “Despite the sadistic torture they endured, they continued their fight towards Black liberation behind the prison walls. This song bears witness to our wonder and desire to dismantle the oppressive systems that hinder our possibilities towards true liberation, to annihilate, to destroy and to rebuild with one another. It’s a battle cry for dreamers who persist in spite of and because. This song moves us and it grooves us towards this end, may we go forward but not by ourselves.”

The b-side features a cover of Amanda Lear’s “Follow Me”. The artwork for the single is inspired by the original Rough Trade 7”s design such as the classic Augustus Pablo single ‘Pablo Meets Mr Bassie’ from 1978. It will also be priced in-line with the cost of records in that era, at just 85p!

Special Interest is a four piece punk band emerging from New Orleans, Louisiana. Combining elements of No-Wave, Glam and Industrial, they create a frenetic and urgent revisioning of punk and electronic music for a modern world gone mad. Propulsive analogue drum machines, a swirling layer of detuned samples, and driving bass lines create the foundation across which angular guitar work and dissonant synth lines glide. Front and center are Alli Logout's (they/them) commanding vocals and razor sharp lyrics moving from high camp satire to insightful political imperatives, often within the course of one song. Special Interest initially formed in 2015 to play one show in a basement. Originally, they were a two piece with Alli Logout and Maria Elena (she/her) playing guitars and power tools over the beat of a 70s Univox drum machine. Soon after they ditched the power tools and were joined by Ruth Mascelli (he/him) on electronics and Nathan Cassiani (he/him) on bass. The band quickly gained a reputation for their intense and energetic live shows - a dense wall of sound oscillating from aggressive and noisy to joyous and danceable, punctuated by the no holds barred on stage persona of their vocalist.

Laura says: Possibly the most infectious tune of the moment from New Orleans four piece Special Interest. "(Herman's) House" is a collision of glam, disco, no-wave and everything in between creating a near perfect electro-punk banger. Oh and did I mention it's super limited, so don't snooze!