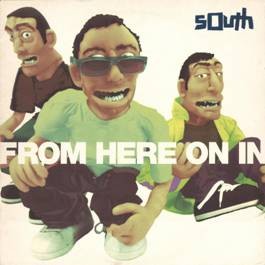 South announce the 20th anniversary re-cut of the cult-classic debut album ‘From Here On In’. They called themselves South as a statement; an act of bravado. Come and have a go if you think you're hard enough. Manchester bands had dominated for two decades, be it the Smiths, New Order, the Stone Roses, the Happy Mondays, and of course Oasis. Now it was the turn of three lads from North London. Move over Madchester. Although commercial success eluded them in the UK, South soared abroad - notably in the US, Germany and Japan. They toured the world with Elbow - one night South would top the bill, the next night it would be Elbow's turn. Guy Garvey would always dedicate a song to them from the stage "because they're real". In the US, their prominence was partly due to the fact that they composed the soundtrack to the smash gangster movie Sexy Beast, and that their biggest single Paint The Silence featured on the teen drama TV series The OC. When South split up in 2008 – four albums and a decade down the line - they had a back catalogue to be proud of.

And twenty years on from its release, their debut album From Here On In sounds as fresh as the day it was first pressed in 2001. Despite the swagger in their name, South couldn't have been less laddish or pugilistic. All three were quietly spoken, thoughtful, serious minded. They originally saw themselves as an electronic act, before morphing into a crusty-haired grunge band. They got a regular spot at the St Moritz Club on the legendary Wardour Street in 1998 and evolved again - less thrashing, more acoustic, tingling guitars, and sublime harmonies. Within weeks of starting at the St Moritz they had signed a publishing deal with Warner Chappell, before James Lavelle signed them to Mo'Wax.

For all that South eschewed the North, they would have been perfectly at home in Manchester. You can hear the influences of the great Manchester bands on From Here On In - the tender Gallagheresque ballad Keep Close; the gorgeous Paint the Silence nodding to the Stone Roses. Yet at the same time they brought so much extra to the party - dance beats in thumping rock rock songs; acoustic ballads that blaze ferociously. The reviews were sensational, particularly in America. "The tempos were stately. the lyrics suitably doleful and warmhearted," said the New York Times. The Chicago Tribune eulogised about "the dreamy atmospheric mix of pensive acoustic songcraft and electronic soundscaping."

Meanwhile Billboard said: "Every now and then a band comes along that prides itself on not fully ascribing to any one musical philosophy. Welcome to the world of north London's South." From Here On In was the perfect post-modern album - ballads to rave to, dance tracks to mourn to, pop rock, electro-rock, folk-rock, instrumental rock, prog rock, and even occasionally rock rock. In many ways the album was decades ahead of itself. Perhaps its time has come now.

SouthFrom Here On Out - Rarities & Unreleased