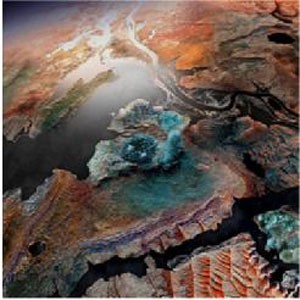 Third album from Soap&Skin, the working moniker for the Austrian musician and producer Anja Plaschg. Her first record in six years.

The album belatedly follows the release of ‘Lovetune For Vacuum’ in 2009 and 2012’s ‘Narrow’ (an Austrian No 1) but in that time in between the artist has been busy, not least with the birth of her daughter and subsequent motherhood but as well with many other creative works such as composing for theatre and film productions, as well as film acting.

Encompassing a range of musical allegiances, the album is infused with tranquil electronica, militaristic percussion, whilst coupled with choral ambience and earthy ethereal grandeur. This is an expansive, stunning, wide-reaching piece of dynamic beauty.

Recorded mainly at her home in a quiet leafy corner of Vienna, the album is not only self-produced but selfplayed.

Barry says: Encompassing the beautiful, softly spoken vocals of Rozi Plain or Icelandic electronic genius' Múm, Soap & Skin tread a fine line between choral ambience and soaring modern-classical, often within the space of a minute or two. A bogglingly competant, and ridiculously diverse smörgåsbord of sound.