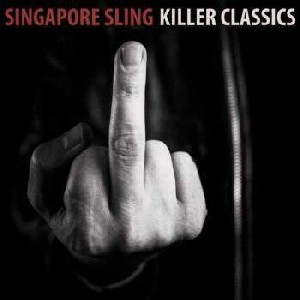 Discordant, claustrophobic and unforgiving, Icelandic psych-rock heavyweights Singapore Sling – the project of Reykjavík-based noisenik Henrik Björnsson – have been conjuring their own scuzzy nihilistic anthems for nearly two decades and have picked-up a cult-like following along the way. Two years on from the Kill Kill Kill (Songs About Nothing) LP, the band are now back with their tenth full-length, Killer Classics. An eleven-track collection of macabre rock’n’roll scuzz, Killer Classics sees Singapore Sling return on top form. Throughout its running time, the record pools together the primal gusto of The Stooges paired with a (un)healthy smattering of Mary Chain fuzz-pedal belligerence and Suicide-esque proto-punk.

More than the sum of their influences, though, each song is delivered with the same trademark charm – or perhaps, lack of – that the band have been cultivating since Henrik founded the project back in 2000. Outlining his mission statement for the record, Henrik says: “The last record [‘Kill Kill Kill’] was about music. This one is about songs. The title of the record is ‘Killer Classics’ because that is what I set out to make: Killer Classics. Just simple, catchy rock’n´roll songs. As rock’n’roll songs should be. Of course.” The album borne out of a particularly challenging period in his life, which he wound up channelling into the new material, he goes on to explain: “Before I recorded this new album I had many frustrating months where I didn’t have the time, space or peace of mind to write and record. When I was finally able to do that again I had to let all that frustration out and I did that by making a lot of noise and saying fuck a lot.”