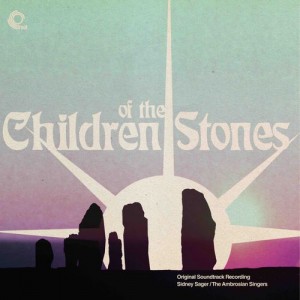 First ever release of the scariest, most inappropriate and possibly most influential kids TV music of ALL TIME.

There is only 17 minutes of music throughout the series, so we have fitted it all onto a one sided LP. Artwork is by Julian House – legendary hauntologist (Belbury Poly etc) and the man behind some of the greatest spooky band artwork of all time- Stereolab, Broadcast, Primal Scream etc etc.

It all looks and sounds superb. Of course it does because it’s a Trunk Records release.

When Children Of The Stones (AKA COTS) was first shown on kids TV back in 1977, just about anyone who watched was scared shitless. The 7 part drama centred around disturbing happenings in a strange pagan village of very weird and unusually happy people, all set in the midst of the stone circle at Avebury – known as Milbury for the show.

The series shown across British TV (and USA TV in 1980) would scar, disturb and influence an entire generation. Without COTS it’s unlikely we’d have hauntology, spooky folk stuff, stone circle clubs, weird walks and a hunger for such pagan oddities everywhere. And COTS really is the key TV series in many of these modern movements, way before The Wicker Man. Even though The Wicker Man was released in 1973 it was an adult film only released to a few cinemas.

Very few people saw it and its influence really started in the late 1990s with the first release of the music. Whereas COTS on the other hand was shown at 5pm, on schooldays, to a whole nation of impressionable kids, who had never seen or heard anything quite like it. The power of COTS runs deep. So much so Stewart Lee made a whole documentary about it. The release of this long-awaited album will be a “Happy Day” for many.

According to rumour the director of the show was listening to Penderecki as he first approached Avebury to scope out locations before filming. The director thought this was a good way for the music to go, and so Sidney Sager and The Ambrosian Singers produced an avant-garde and often quite oddly terrifying sequence of vocal drones and dramatic peaks based on ancient Icelandic singular word “Hadave” for the show. And they still terrify today.