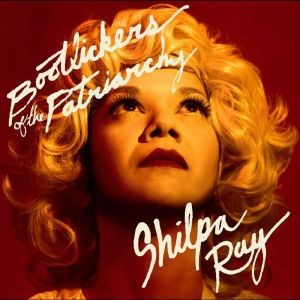 Bootlickers of the Patriarchy was written about Senator Susan Collins and her infamous press conference after the Kavanaugh/Blasey Ford hearings It's about women who succeed from undermining the success of other women or choose to gain success from exploiting the oppression of other women. This is a character who has taken many forms throughout history, the kind of woman who seems perfectly content playing Gamma to the Alpha male. "Bootlicker" is my direct challenge to the notion of 'women supporting other women,' and the falsehoods and unrealistic expectations that comes with a statement like that." "I wrote the song to be played in two different arrangement styles, the first half being slow and haunting and the second going balls-to-the-wall rage. I was re exploring a lot industrial/proto industrial music I had listened to as a teenager in the 90s and used some elements of synth/drum machine sounds to convey all that anger, panic and darkness." // "Well, why not do a cover of your influences as a B- side? I was obsessed w/ the Ministry album 'With Sympathy' when writing tracks for my upcoming album. It is the record Al Jourgenson has stated multiple times that he's ashamed of most, which is saying a lot considering this man's autobiography. I teamed up with my friend Heather Elle of Flossing, formerly of post punk bands Bodega and The Wants for this collaboration. It's my first official recorded track where I'm playing guitar, so as the saying goes, it's never too late to pick up a new instrument and get totally lost in it."

A1. Bootlickers Of The Patriarchy
B1. I'm Not An Effigy