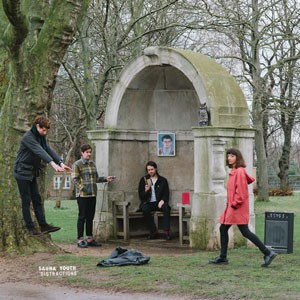 Sauna Youth are an evolving band of future humans making truly irregular punk, not quite comparable to anything else. 'Weird' is a meaningless platitude, and 'art punk' is a classifier that shouldn't be required.

Album announced on The Quietus: http://thequietus.com/articles/17299-listen-new-sauna-youth

Consisting of Richard Phoenix (drums, vocals), Lindsay Corstorphine (guitar), Jen Calleja (vocals, sampler) and Christopher Murphy (bass), Sauna Youth are a punk band that’s happy to embrace all of the contradictions that go along with that notion. On paper Sauna Youth sound considered - live they can barely be contained. They are at times furious, unstoppable and severe with the sampler wailing like an alarm coming from a parallel universe – then chugging, poppy, harmonious and fun. Forever loud. As Kurt Cobain once asked "Why can't we be both Black Sabbath and The Beatles?" Sauna Youth consistently pose the question, “Why can't we be both The Ramones and Steve Reich?”

Having formed in Brighton in 2009, the band then moved to London in 2011, shifting its line up to its current constellation. Brand new album, ‘Distractions’ marks the first time the band has managed to write everything in a room together and also documents the first time they have entered a studio to record; the songs in turn created through the process of learning to write together. ‘Distractions’ was recorded over a couple of days in July 2014 at Sound Savers in Homerton with Mark Jasper, then mixed by the band and mastered by Kris Lapke.

‘Distractions’ is made up of 14 songs about desire, but more importantly, about that area just out of reach of desire, at the very centre of the human psyche. It looks at what it means to be distracted from being yourself. It thrives in the desire to be someone else, the very idea that you could be someone else. It’s also an album that feels instinctive and natural, flowing freely from a band that have come to terms with the sum of its parts. Ultimately though, Sauna Youth have made a colossal record which is impossible not to dance to.

Attracted to the possibilities apparent within a DIY philosophy, the band self-recorded and self-released their own music pretty much until the release of their debut LP ‘Dreamlands’ on Faux Discx/Gringo Records in 2012. ‘Dreamlands’, opened with the 10-minute introduction to the ‘Town Called Distraction’ where the stories on this new album find themselves living. This new album opens with the same locked groove from the end of previous one. Until ‘Transmitters’ suddenly breaks the cycling ambience, racing off at full pelt, its guitars pulsing and chopping in a terse manner before the chorus crashes in like a wave. By singing every word at the same time, Ecke (Calleja) and Boon (Phoenix) create a unified voice of no specific gender, allowing the songs to be sung from multiple perspectives, from a place of shared experience. The song’s lyrics branch out of ideas of Transhumanism; looking for a way to live forever, for something that makes us last, like recordings – “I want my thoughts scratched into plastic/hear my voice on an endless loop/I like persistence” they sing in unison.

‘New Fear’ is an elegy for endless lost hours, endless wasted nights, the strangle hold of feeling that you’re missing out. ‘Monotony’ represents a desire for a change that won't come: history repeats, music repeats, it's just the context that changes. This is echoed in the type of streamlined focus the band have on composition too, everything drives onwards with inner compulsion, there is no outward hesitation.

With ‘Cosmos Seeker’, the authenticity of character is explored. The drums strictly pinning in place the jabbing guitar chords and vocals into a propulsive swarm of sound. ‘Modern Living’ is a song that could only have been written now by the band, it sounds effortless yet thrilling all the same, so realised but seemingly spontaneous. ‘Modern Living’ considers another desire, this time the need for a new way of living that escapes the threat of your job becoming your whole life. ‘Distractions’ also includes two poems put to music: ‘(Taking a) Walk’ by Ecke is a rumination on the body, specifically female, in public spaces whilst ‘Paul’ by Boon explores individuality and authentic performance. Themes of anxiety, indecision and preoccupation run throughout the album.
As well as performing as Sauna Youth, all four members are also make up the band Monotony, which they formed while writing ‘Distractions’ last year by swapping their roles around in the group. They did two sessions over two days as both bands for Marc Riley on BBC 6 Music, and both bands were invited to play DRILL Festival by Wire. As well as playing in Monotony, members of Sauna Youth are also in Tense Men, Primitive Parts, Feature and Cold Pumas. They’ve previously played with Pissed Jeans, Thee Oh Sees, Ty Segall and Protomartyr, toured with Ceremony and Cold Pumas, and played at both Liverpool and Oslo Psych Fests. They have plans for a European and US tour later in the year and Upset the Rhythm will be releasing a split 7” by both Sauna Youth and Monotony in the run up to the release of ‘Distractions’ too.

Beginning and ending in squalling feedback ‘The Bridge’ is always the song that rings longest in your head when listening to ‘Distractions’, it’s full of the desire to set yourself apart, to connect and hold focus. It’s exactly this halfway house existence which best exemplifies the band, there’s no standing still when there’s such desire to escape to the next song, there is only transformation and desire.