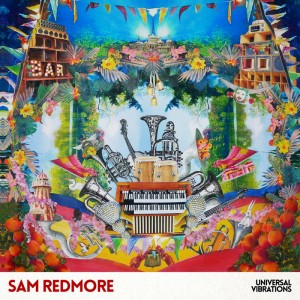 Having established himself first as a DJ and then as a remixer, Sam Redmore is now very much making himself known as an original producer of quality global grooves that can light up any dancefloor, carnival or party.

After garnering early support for his remixes from the likes of Gilles Peterson, Quantic, Nightmares On Wax, The Nextmen, Lauren Laverne, Danny Krivit and Craig Charles, Sam has built a name for crafting soul-drenched remixes of the classics, with his army of fans eagerly awaiting every new re-work.

Signing to Jalapeno Records for his debut album of original material, Sam has kept the eclectic tastes of all his fans satisfied with a series of very different singles showcasing the wide range of styles he is known for - all picking up rave reviews and a very wide spread of radio support including Radio 1 / 6 Music / Radio 2 / Jazz FM / Worldwide FM in the UK as well as hitting Number 1 most added on US college radio charts (world).

The single Nagu in particular has become a mainstay on daytime 6 Music but each successive release has been finding new fans. From his killer cumbia covers (Tears / Just Be Good To Me) through to the afro-house exuberance of One More Time and leading neatly up to Just Can't Wait, an extremely soulful disco house floorfiller, this is an album with broad appeal both in the UK and overseas.

In the meantime, Sam has been honing his live shows throughout 2022, with festival bookers keen for a piece of the action. Boomtown, Wilderness, Green Man, Kendal Calling and a whole host of others have seen what the punters at Mostly Jazz, Funk & Soul Festival saw last summer, when Sam debuted his live show on the main stage of a key festival on the Saturday afternoon. Anyone who was there and saw the audacious 12-piece live ensemble playing their first show knew they were seeing something special.