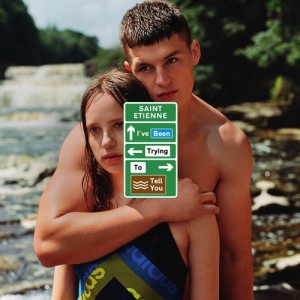 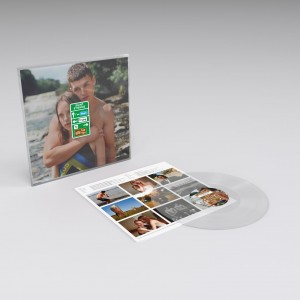 Can it be that it was all so simple then? Or has time rewritten every line?
Marvin Hamlisch was not yet 30 when he wrote those words for the mouth of Barbra Streisand. Even then, Hamlisch was acutely aware that as a narrator of our own stories, the human memory is at best unreliable and at worst mendacious. That same awareness resonates through every bar, beat and breath of I've Been Trying To Tell You, the tenth studio album by Saint Etienne.

The album is made largely from samples and sounds drawn from the turn of the new century, a period that was topped and tailed by Labour's election victory and the terrorist attack on the Twin Towers. “It's about memory,” Bob explains, “and how it can fog and play tricks on you. Specifically, it's about the late Nineties, and current nostalgia for the Nineties.”

Formed in Croydon in 1990 by music journalist Bob Stanley with childhood friend Pete Wiggs, and soon joined by singer Sarah Cracknell, Saint Etienne arose within the context of the indie- dance movement of that era but created a unique sound which – albeit accidentally – paved the way for what would later become known as Britpop.

Their earliest albums – 1991 debut Foxbase Alpha and its 1993 successor So Tough – tapped into the collective consciousness by using an accretion of disparate elements - Long Wave football commentary, a snatch of Four Tops vocals or a sample of Dusty Springfield strings, some dialogue from Billy Liar, a melody from a long-forgotten perfume ad – to create a richly evocative memory-world which was specifically British, even when the component parts themselves were not.

The resulting emotion, of course, is bittersweet. Saint Etienne's music has always captured the feeling that the Portuguese call saudade, the Welsh call hiraeth and the Germans call sehnsucht: a combination of homesickness and longing, a melancholy yearning for a time, a place, a person or a mood that can never be revisited.

It's what the Scottish comedian Brian Limond was driving at with the heartbreaking Limmy's Show sketch in which he visits a travel agent and shows them a blurred colour photograph of himself and his friends on a teenage holiday in the Ayrshire resort of Millport. “Can you tell me how I get there?”, Limmy asks the confused agent, who initially tries to sell him a ticket to Millport. “No, not the place,” Limmy replies. “The feeling.” Saint Etienne's 2002 single “Action” expresses a similar desire: “Cos I've been searching for all the people I used to turn to, and all the people who knew the answer... Let's get the feeling again...”

Another constant in Saint Etienne's music has been their understanding of the power of dreams. There's a strand of pop which stretches from The Beach Boys' SMiLE through Saint Etienne to The Avalanches' Since I Left You and beyond which defies the reductive term 'dreampop', and instead evokes the genuine sensation of dreaming: blissful, yes, but also unsettling and disorienting. Saint Etienne's early career masterpiece “Avenue” conjured that realm for seven minutes, and I've Been Trying To Tell You inhabits it entirely. The album ties together these two Saint Etienne threads – memory and dreams – and tells us directly something which has always been implicit in Bob, Pete and Sarah's work: that memory is a dream.

“I spent a lot of last year thinking about optimism for the future,” says Bob, “and the almost total lack of it at the moment. That got me thinking about the last time there was a general optimism in the country and I thought about May 1997, the window between then and September 2001, which it's easy to look back on as some kind of innocent golden age, even if it didn't feel like one at the time. In reality, of course, there was good and there was bad.... Primary schools and art galleries and hospitals were built versus we bombed Belgrade and introduced PFI!”

Reflecting upon that era, and upon the collective (mis)remembrance of it, led to this new Saint Etienne album. “We thought, if you used samples from the late Nineties - the supposedly promising bit between Labour winning the election and September 11th - what would the music be and what could you do with it? Modern nostalgia culture often draws on corporate American Nineties mall culture, but what about British BBC radio culture? Could those sources be used to actually sound like the era, but through the fog of memory?”

Two decades on, a combination of False Memory Syndrome and collective amnesia has grown up around those early New Labour years. The first Blair administration is nowadays viewed variously as a lost golden age, or a period of naïvete, delusion and folly, and a million different shades in between. “YouTube has so many nostalgic clips of slowed-down grainy footage of shopping malls,” says Bob, “often tagged 'liminal spaces' or something like that, post-Burial, post-Mark Fisher, with vaporwave-like music made by people younger than me who see the Eighties and Nineties as a simpler time. I find this fascinating. What you choose to remember or choose to forget... ASBOs and paediatricians getting death threats in Wales... those bits get forgotten.”

Even at the time, a complacent illusion about the Nineties had taken hold, filtered down from Francis Fukuyama's The End Of History, that benign liberal democracy had triumphed forever and there were no struggles left to be fought. And, even at the time, an equal and opposite sense of disillusion had taken hold of Bob Stanley. On the first anniversary of Blair's election victory, Bob went to the Granita restaurant in Islington, where Blair and Brown had famously struck their power-sharing deal, and felt a sense of emptiness which he later described in the first verse of “Heart Failed In The Back Of A Taxi”: “Took a trip down Granita way/Had to go on the 1st of May/Didn't have much to celebrate...”

Saint Etienne have always understood that pop music is the nearest thing we have to time travel, the closest we can get to breathing the air of a different time. On this album, they take that theory to its logical conclusion. I've Been Trying To Tell You uses sounds and samples from 1997 to 2001, evoking the folk memory of the period by using and twisting recordings from the time, re- working them into new songs. “They're all by people you'd have heard on daytime Radio 1 or 2 at the time,” Bob clarifies, “not Boards of Canada or anything.” Opening track “Music Again”, for example, begins with some gorgeously poignant electric harpsichord from a long-forgotten R&B hit.

For the first time, Saint Etienne didn't record together in a studio. The album was completed remotely, in Hove (Pete), Oxford (Sarah) and Bradford (Bob, in collaboration with film and TV composer Gus Bousfield, who contributes to a number of tracks). Communication was handled via Zoom meetings and emails. “We had the idea for the album before the pandemic, and it was surprisingly straightforward.” The results are exceptional. “I'm really excited about the way the album has turned out,” says Bob. “It feels like something brand new.”

I've Been Trying To Tell You has an internal unity, its heartbeat always at the low end of mid- tempo/high end of downtempo, landing at the approximate pace of Tricky's Pre-Millennium Tension (an album released on the very cusp of the era in question). This helps sustain the dream-state.

That hypnagogic sensation is enhanced here and there by the eerie sound of seagulls and garden birds. It's like falling asleep listening to Minnie Riperton's “Lovin' You” and coming a- dreamwake in Kew. This, it turns out, is another turn-of-the-millennium reference. “In the early series of Big Brother,” Bob explains, “when Channel 4 used to broadcast live from the house in the daytime, they'd dip out the sound whenever the housemates talked about real life people, or swore or whatever, and they'd replace the sound with quite avant-sounding field recordings of birdsong.”

The lyrics, too, obey the fractured logic of dreams. Sarah Cracknell sings in short phrases - “here it comes again”, “never had a way to go”, “ruby dust”, “a love like this again” - looped and repeated, rather than a traditional verse-chorus-verse structure. “They are all snatched phrases that could have been used at the time,” Bob explains, “from news items, or songs, or magazines.” The album's centrepiece is arguably “Little K”, the fourth track of eight, a six-minute oneiric ocean which ends with the sound of lazily lapping waves. The words that filter through the haze are ones which define the album: “No reason to pretend. In my reverie, the mind will carry me...”

The reverie has interludes with no words at all, at least not sung. “Blue Kite”, made from backwards strings and synths and bassy beats from the room next door, is entirely instrumental, as is “I Remember It Well” apart from snatches of mysterious voices which evoke childhood holidays. Some tracks, like some dreams, are simply too strange for analysis: the inscrutably- titled “Penlop” (a Tibetan term which translates loosely as 'governor') has a refrain which appears to run “I don't really know you/But I'd like to show you/Chester town/We went all around...”

The accompanying film, which premieres at the NFT in the first week of September and will also be available as a DVD with the album, came about when Bob Stanley contacted Alasdair McLellan after the latter had used Saint Etienne's “Nothing Can Stop Us” in a Marc Jacobs commercial. They met a few times, pre-pandemic, in a cafe under Shipley clocktower. “Alasdair understood the album straight off,” says Bob. “We talked about youth, and the A1, and British identity, and memories of the recent past. He's really made a beautiful film, and it perfectly complements the album. Alasdair's film also taps in to the way we think of our youth, and sense of place, and where we come from.”

McLellan's film – a still from which adorns the album sleeve - is a slow-motion travelogue that takes in “a lifetime's worth” of locations, including Felixstowe, Blackpool, Portmeirion, Avebury, Southampton, Doncaster, Grangemouth, as well as London. It its vignettes, we see a couple breaking up on a Westminster bench, a man skimming stones across the water from an oil terminal, a ballet dancer rehearsing, a raver dancing in the headlights of a Ford Cortina, youths playing in a Yorkshire waterfall, teams meeting in caffs. The album dovetails immaculately with the visuals. When we do hear anyone speak, it's only to recite lyrics from classic Saint Etienne songs, all taken from the Nineties.

The dreamlike mood of the album, and the film, is a statement in itself: namely that memory is a largely fictionalised product of the human mind, rather than a reliable record. I've Been Trying To Tell You – the album, and the film – sifts through those Hamlischian misty watercolour memories of the way we were, and poses the question: was it all just a dream? Saint Etienne have always known the answer. They've been trying to tell you.

Barry says: While Saint Etienne are well known for pulling together a host of influences into their own particular clever brand of indie, their latest outing is perhaps the most confidently nostalgic tribute yet, crafted from found sounds and snippets of samples from the early 00's, leading to an evocative and wonderfully realised triumph.