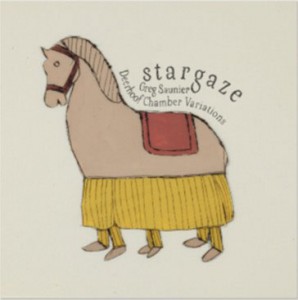 Transgressive Records are proud to announce that Berlin’s instrumental collective s t a r g a z e have signed to the label, anointing their partnership with the stunning EP ‘Deerhoof Chamber Variations’.

‘Deerhoof Chamber Variations’ is devised as a continuous piece of instrumental music, based on 9 1/2 songs which drummer and composer Greg Saunier originally wrote for his acclaimed band Deerhoof.

Different from most other band and orchestra / classical collaborations Greg himself arranged and recomposed the material for a classical chamber ensemble, using exactly the same notes as in the originals while rearranging the songs structurally, in a kind of miniaturizing and abstracting way.

s t a r g a z e adapted this new composition to their particular line-up and the musicians’ personal skills, as Greg Saunier produced the album in Berlin in the freezing winter days of December 2015. The intimacy is evident - favouring the dry sound of the Beatles and George Martin’s approach to recording classical ensembles, rather than the lush approach favoured today.

The 19 minute piece of music is the latest in a series of collaborations for s t a r g a z e, who have previously worked with Julia Holter, Owen Pallett, Nils Frahm and Matthew Herbert.