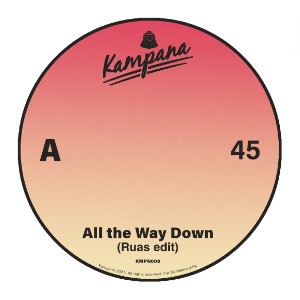 Kampana put together arguably their hottest 7" so far, with two heavily in demand tracks from Brazilian producer Ruas, who shows his creativity, blending unique samples with live musicians.

'All the Way Down' is a monster jazzy disco-house number, with freshly recorded drums and up-front bassline, taking the groove levels off the chart on a retro soul vocal.

On the flip, 'Like You' sees Ruas digging deep to find the unmistakable voice of a true 'royal' legend hyping the crowd in a rare live interlude.
Ruas went into the studio with his crew of Brazilian musicians to record a full instrumental to blend with the vocals. The result is a jazz-heavy track that sounds like it could easily have been discovered in the artist's lost archives and will cause a riot on the dancefloor.

Matt says: More incendiary party music from the Kampana cartel. Really feeling the bump and brass of "All The Way Down".

All The Way Down (ruas Edit)
Like You (ruas Rework)