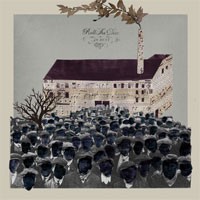 "An album of real musical weight, a slap in the face to the vapid music that washes over us ceaselessly. it is a thing of deep beauty, dexterously combining the gravitas of something very old with the excitement of something very new." - Dan Snaith (Caribou) in Music Week July 2011.

'In Dust' is Roll The Dice’s stunning first full-length album for The Leaf Label, following the limited edition Live In Gothenburg – August 7 2010 12” EP, released for this year’s Record Store Day.

Influenced by Steve Reich and the Kosmische music of the 70s, there are also parallels to be drawn with contemporary artists such as Emeralds, Oneohtrix Point Never and Gavin Russom & Delia Gonzalez.

“Palpably unsequenced and semi-improvised, this set stylishly updates the analogue minimalism of Manuel Gottsching, Tangerine Dream and Conrad Schnitzler with a very 21st century grasp of dub-space and machine-swing. Recommended” Boomkat on Live In Gothenburg.

Roll The Dice are Peder Mannerfelt (who produces and performs live with Fever Ray and records as The Subliminal Kid) and Malcolm Pardon (who writes and records music for film and TV) . Their emotive and slightly unsettling compositions summon the ghosts in the machine, resonating with pure analogue depth. The album was recorded in their own studio, mixed at the remote Ocean Sound studio in Norway, and mastered and cut by Stefan Betke (Pole) in Berlin.

Darryl says: Roll The Dice push the kosmische buttons here with their evocative and emotive analogue grooves. Reminiscent of Tangerine Dream, and Manuel Gottsching in their 70s Krautrock pomp, as well as latter day soundscapers like Emeralds and Oneohtrix Point Never. Superb!