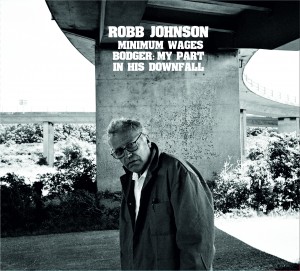 Last year Robb released the vinyl-only album Minimum Wages, 9 songs performed on acoustic guitar, with guest appearances from Boff Whalley, Fae Simon & John Forrester on vocals, Jude Abbott on brass, Jason Pegg on accordion & Jenny Carr on piano. The album was very well-received; “a timeless album for the times” (****RNR), Folk Radio UK named it as one of their top 10 albums of the year, & Ian Anderson said it would have been one of Podwireless’s CDs of the year – if it had been on CD.

The album has its CD release as part of a double album with Bodger: My Part In His Downfall, a collection of 20 songs chronicling the events of the last three years – “the worst of possible times to have the worst of governments too.” There are voice & acoustic guitar based tracks, 2 ukulele songs, & various contributions from Irregulars Sian Allen (trumpet), John Forrester (bass), Ali Gavan (drums), Arvin Johnson (drums), Linze Maesterosa (clarinet), Fae Simon (b/vox, lead vocal on track 190, & from Irregular Records recording artiste & award-winning poet Roger Stevens (piano). The recording of the album’s last track “Goodbye” was finished on July 6th - & the following day the Prime Minister resigned. Irregular Records decided to release the album to celebrate the departure of this most murderously lazy, corrupt, mendacious & incompetent of Prime Ministers. The double album includes a 12 page booklet with notes for all the songs.

Bodger: My Part In His Downfall:
1: Well Done Little England
2: The Cheese & Wine Of Privilege
3: Barry Bucket
4: Common Sense
5: Don’t Forget To Wash Your Hands
6: Tony Skinner’s Lad
7: Blue Light On A Red Brick Wall
8: When The Leaves Have All Fallen
9: Jack & Jill Are Good For The Economy
10: Chipping Sodoffbury
11: Shut Up & Just Go Xmas Shopping
12: We Can All Join A Union
13: The Plague Ship
14: What A Week It Was When The Pubs Reopened
15: Freedom Day
16: You’ve Only Got Yourself To Blame
17: Well Done Little England
18: The Worst Prime Minister In The World
19: Sunlight On The Wall
20: Goodbye